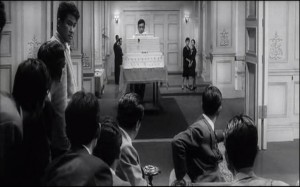 The Bad Sleep Well. Used with permission from Toho Studios.

Continuing my focus of recent weeks on film adaptations, this week we look at one of the most intriguing cross-cultural adaptations of literature. Famed Japanese director Akira Kurosawa made a couple of noted samurai adaptions of Shakespeare’s works, like The Throne of Blood (1957) from Macbeth and Ran (1985) from King Lear. Kurosawa borrowed Shakespearean narratives without attempting direct translation of his poetic language. But Kurosawa’s 1960 hidden gem The Bad Sleep Well is a truly fascinating modernization of Hamlet, set in the Japanese corporate world where a young executive seeks revenge for his late father’s death.

The film begins with a wedding ceremony, much like the early scenes of The Godfather. Yoshiko (Kyoko Kagawa), the daughter of the president of a government housing corporation, marries Koichi Nishi, her father’s secretary (Toshiro Mifune). When the couple’s second special wedding cake, an elaborately constructed cake shaped like an office building with a single red rose placed on an upper floor window, is ushered into the festivities, several members of the Public Corporation and Iwabuchi (Masayuki Mori), the president, are reminded of the scandalous suicide of a former employee who died mysteriously five years before.

Soon after the ceremonies, a police investigation begins focusing on allegations of bribery by a construction company connected with Iwabuchi’s company. Several men are set up to take responsibility for the wrongdoings; one commits suicide and the other, an accountant named Wada (Kamatari Fujiwara), is saved from his death by Nishi. Nishi then uses Wada in his plans for revenge against his father-in-law, as it is revealed that Nishi was the son of Furuya, the man who was killed five years before.

Kurosawa’s story unfolds with a dark, film noir moody atmospheric style. Dark, shadowy streets, late-night car rides and dimly lit hideouts all create a rare post-war look at Japanese business greed in this compelling revenge tragedy. Kurosawa’s cast includes his favorite lead, Mifune, in a very effective and subdued role as the vengeful Nishi. Mori is also noteworthy as the guilty Iwabuchi.  Other famed Japanese stars of the 1950s, Takashi Shimura and Chishu Ryu, appear as an administrative officer and a public prosecutor.

This film has a special place in Kurosawa’s career. According to Donald Richie’s The Films of Akira Kurosawa, the great director said The Bad Sleep Well: “This was the first film of Kurosawa Productions, my own unit which I run and finance myself. From this film on, I was responsible for everything. … A film made to make money did not appeal to me — one should not take advantage of an audience. Instead, I wanted to make a movie of social significance. At last, I decided to do something about corruption because it has always seemed to me that graft, bribery, etc., at the public level, is one of the worst crimes there is.” Frequently overshadowed by his many classic action samurai films, Kurosawa’s The Bad Sleep Well is a true hidden gem.