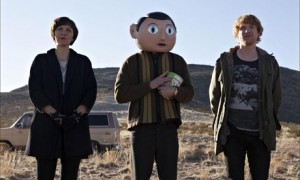 For many musicians, the prospect of making it big, gaining widespread acclaim and recognition, is the dream. But when would-be musician Jon stumbles upon an indie band, Soronprfbs, led by an unusual man named Frank, he finds might have bitten off more than he can chew, as told in director Lenny Abrahamson’s film Frank.

Right off the bat, Frank, both the character and the film, is weird. A humorous take on the concept of indieness and a critique of how people consume music, Frank juxtaposes odd scenarios with bursts of seriousness. The members of Soronprfbs, with Jon (Domhnall Gleeson) in tow, hole up in a faraway cabin to record their album and proceed to spend months getting ready.

Frank, inspired by Frank Sidebottom and played by Michael Fassbender wearing a papier-mache head, is the talented and meticulously detail-obsessed leader of Soronprfbs. Nothing less than perfection is acceptable for him, causing many delays in the album-making process. The rest of the band is comprised of Clara (Maggie Gyllenhaal), a close friend of Frank; Don (Scoot McNairy), a crazy manager; Baraque (Francois Civil); and Nana (Carla Azar). They all have their own quirks but, with the exception of Frank, are all united in their disapproval of Jon.

Even so, Jon is happy enough, uploading YouTube videos of their music sessions and tweeting his excitement for being involved in such an interesting project. But while the film is hilarious for its tongue-in-cheek humor, the film starts to take a darker turn as details about Frank become known and Jon slowly unravels the mysteries of the band. It remains funny and charming throughout, but the tone definitely makes a shift for the gloomy. The deeper we’re immersed into the world of Frank, the more it becomes clear that more abstract themes are at work.

Even under a mask, Fassbender still shines through as an enigmatic character. And while most of the band works along to create the wacky and weird atmosphere, the same can’t be said about Jon. As the straight-edged, passive protagonist, it’s expected for him to be the lame duck, but Gleeson does little to flesh out his character. In a world where big-headed singers are analogies for the human condition, Jon is a waste of space and a mess of irrational motives.

But the technical quirks of the film quickly melt away once you see Frank frolicking on fields of grass or when Soronprfbs starts creating music. The foundation of the story becomes shakier toward the end, and Jon is a bit drab, but these are minor distractions from a surrealist mockumentary into a fascinating fictional band. Frank never reaches the ambitious goals set forth by its characters, but the resulting project is one that even Frank would be proud of.