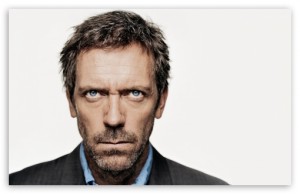 Hugh Laurie’s American accent is notoriously good – so good that many fans of House  never even knew he was British. Photo used with permission from 20th Television.

Have you ever thought you knew everything about a person, and then been thrown for a loop when he or she revealed a new side? This can translate into television, wherein you grow so attached to a character that the actor’s true personality is the real plot twist. For example, who knew Suits’s serious, no-nonsense Harvey Specter is played by a real-life goofball? Likewise, many House, M.D. fans have enjoyed the entire series without realizing their favorite doctor was faking his American accent. Which other actors have managed to hide their true inflections from us—and which were so obvious, we just knew they had to be British? Here are some of the best and worst accents affected by British actors on our TV screens.

The first actor mentioned for this list would have to be Hugh Laurie, for managing to trick a large amount of his House, M.D. fans into believing he was actually from America. In an interview on the The Graham Norton Show, Laurie stated that American fans “always said—in a kind way—that I’ve managed to ‘lose the accent.’ I have to explain to them that I’m not losing an accent. I’m putting one on.” Whether he was apologizing to Cuddy, making Wilson or Chase apologize to him, or simply rattling off complex prognoses, House’s accent was foolproof. The show is famous for the line “everybody lies”; while Hugh Laurie wasn’t lying, per se, he sure managed to make us diagnose him with one amazing American accent.

Interestingly enough, Lauren Cohan was actually born in New Jersey but moved to England while still in her formative years. Starring in AMC’s The Walking Dead as Maggie, Cohan’s American accent is as alive as the zombies she runs from. While not necessarily a bad actress, Lauren Cohan simply cannot pull off the “ranch girl” accent she attempts to sport in the show. But it’s all right; Glenn still loves Maggie anyway.

3. BEST: Alfred Enoch – How to Get Away with Murder

Dear Harry Potter fans, Dean Thomas still lives! Well, maybe not as the jovial, mischievous and very British character from the beloved movie series. Alfred Enoch now plays Wes Gibbins in ABC’s new television show, How to Get Away with Murder. His new character attends a university in Philadelphia and, thanks to Enoch’s immaculate American impersonation, we can certainly believe Gibbins is paying state tuition there. Ten points for Gryffindor!

Gerard Butler’s strange “American” accent simply begged to make the list. In The Bounty Hunter, Gerard Butler plays Milo, the ex-husband of Jennifer Aniston’s Nicole Hurley. Perhaps Butler’s accent is more noticeable because the two have continuous dialogue, and we have direct comparison between an acted accent and an authentic American accent. Still, throughout the film, it was unclear whether Milo was from New Jersey, England or—during a particularly exciting car chase—Texas.

Admittedly, Hugh Jackman’s American accent was less than up to par in X-Men Origins: Wolverine. But considering the movie’s track record, his accent was one of the film’s lesser problems. Four years later in similarly named The Wolverine, however, Jackman gets another chance to prove Logan has an American passport. And through what little dialogue he has amidst fighting bad guys, rescuing the obligatory damsels in distress and getting stabbed a spectacular number of times, Jackman does just that. It made me quite (what was the word?) quite “chuffed” to see the improvement.