Kansas City singer-songwriter Doby Watson will release his new album Live-In Son this Friday through Urbana label Error Records and Double Shift based out of Astoria, New York. You can stream the record exclusively via buzz:

Watson has been around the Midwest DIY scene since he was a teenager, playing under the name Boo Hiss. The Kansas City musician’s songwriting has matured along with his age, while his albums have become increasingly better produced and executed.

The songwriter’s last project came in the summer of 2013 when he released a split EP (Watson & May) with singer-songwriter Margo May. Live-In Son builds off the quality of Watson & May and implements a stronger lyrical theme, dealing with the frustrations of moving back home and battling substance abuse.

“Once I have a batch of songs that fit a particular theme, I reach out to people I think would play well on the songs,” Watson said in an interview with buzz. 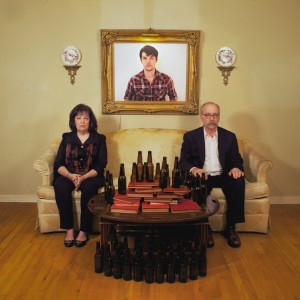 Doby Watson’s Live in Son will be released Friday via Error Records (Urbana).

Ryan Brewer (Hank., Good Night & Good Morning, Capys) produced the record from Champaign and will be touring with Watson under his new project ZXO.

Live-In Son hits full-stride with “In Rows” and “Family Mattress” coming back-to-back as the third and fourth tracks.

While the initial focus centers around Watson’s songwriting, the musician’s use of the electric guitar on Live-In Son is one to take note of. Its disciplined use offers up a subtlety that doesn’t take attention away from the attraction of Watson and his acoustic sitting at the forefront, but rather adds the necessary warmth to the songwriting.

The package of Live-In Son isn’t completed until you take into account the addition on keys. Watson recruited musician Grant Buell to add Rhodes piano, which finishes off the spectacle created by each track on Live-In Son, working alongside the guitars to build up to the point where you forget there’s no drums on the entire record. At times the whirling composition disappears in an instant and you’re left with nothing but Watson – alone, exposed, and confessing the troubles that stretch throughout the album’s lyrical theme.

“There were a few pretty rough years where I moved back in with my parents, was drinking a lot, wasn’t playing or writing much music and really not doing much of anything with my life except wallowing and being very self destructive,” Watson said. “Naturally, when I felt motivated to write again, a handful of the songs were about that time and thus the album Live-In Son was made.”

Watson will officially release the record at Live-In Son‘s release show Friday night at Error Records. The show starts at 8 p.m. and costs $5.

You can check out the complete list of Doby Watson’s tour dates here.