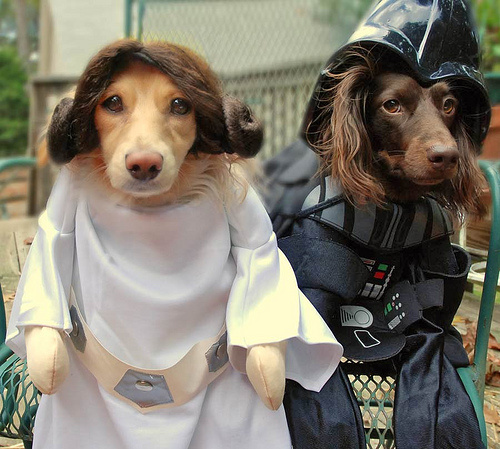 Every dog has its day, and Howl’oween may just be your pup’s chance to shine. Residents are double-dog dared to bring their costumed cutie to join in on the Halloween festivities during a Champaign Park District sponsored costume contest on Saturday, Oct. 26 in Champaign.

Registration for the Fourth Annual Dog Day Howl’oween is onsite and starts at 1 p.m. at the Champaign “Bark” District, located on the south side of Windsor Road between Rising Road and Staley Road. Dogs in costume will parade on leashes around the “small dog” section of the dog park while the “large dog” section will be open for free play. The lineup starts promptly at 2 p.m., and costume judging will immediately follow. Judged areas will feature four categories: Best Costume on a Dog Over 25 Pounds, Best Costume on a Dog Under 25 Pounds, Best Costume on a Puppy (six months or younger) and Best Matching Pair (entries of two dogs dressed to match or human and pup dressed to match).

“Last year, there was a little Chihuahua that dressed up as Superman,” said Jimmy Gleason, Champaign Park District events coordinator. “The owner would try to get the dog to jump up in the air to make it look like it was flying. That was pretty good.”

All canine entrants must be members of the Champaign or Urbana dog parks prior to Oct. 26. No membership registrations will be available on the day of the event, and the entry fee is $5 per dog. Gleason informed that the turnout is usually about 25 dogs and 50 to 75 residents. The Dogs Over 25 Pounds category typically has the most participants.

“It’s a free event that people can go to as long as they’re dog park members,” Gleason said. “It’s also free for spectators, so it’s a great way to just pull people together.”

All dog park rules will apply during this event—no bones about it. No humans under the age of six years will be allowed in the park, no pups under the age of four months and no more than three dogs per person will be permitted. Gleason stressed that the best thing one entering the competition can do is opt for creativity over the conventional, and to “be unique. A decent amount of people get costumes from Petco or PetPlus, but usually the people who win are the one who make their own costumes or make a unique pairing.”

Prizes—including dog treats, food, free dog exams and free pampering—are sponsored by the Animal Hospital at the Crossing and will be given for first and second place within each category. They will be selected by a panel of judges, consisting of community members like veterinarians, animal hospital workers and other district staff. Dr. Tegan Stoerger, DVM for the Animal Hospital at the Crossing, will be hosting with her husband as well. At the very end of the event, scores are rounded up and averaged. According to Gleason, the best way to make your dog memorable is to go for a quirky, untraditional combination.

“Last year, there was a firefighter with a firefighting dog,” Gleason said. “Someone also came as Charlie Brown with their dog as the Great Pumpkin.”

Gleason says the event is a fun way to interact with other dog owners and enjoy the community of other dog park members.

“It’s just another way to pull people together for a good time and I think generally, dog owners like to socialize and connect with one another,” he said. “(My favorite part is) seeing all the creative people out there passing with (their) dogs and how much they get into it. It pulls people together by letting them meet people with dogs so they can share that passion and connection.”

So whether you have the cutest pup-kin in the patch or the most terror-ific terrier in the hood, don’t be a ‘fraidy cat and join the Howl’oween march dedicated just for man’s best friend.