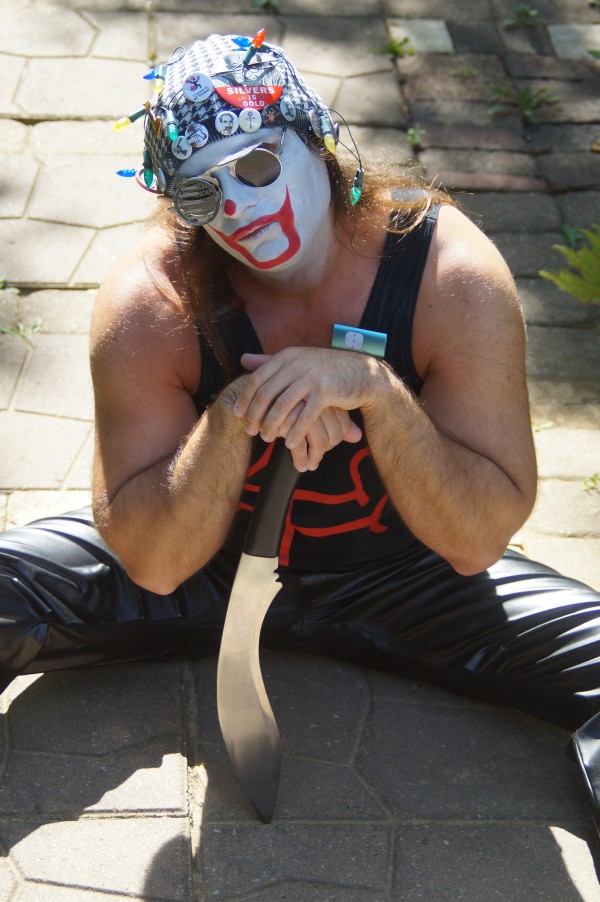 You’ve never met anyone like him or, more accurately, them. Through his professions alone, Jake Aurelian offers a distinct individuality, as he is both an author and a comedian. Aurelian adds to his individual flare even further, however, with his alter ego: Ripper the Clown.

Graduating from the University in 2000 with a degree in Media Studies and minor in Rhetoric, Aurelian has written eight books to date. Since 2012, his fiction works have received eight international literary awards.

Through his books, Aurelian provides a smart, refreshing and unique style of writing. In The Life & Mimes (& Zombie Apocalypse) of Ripper the Clown: The Autobiography of an Unconventional Zombie, for example, Aurelian puts a new twist on the typical zombie genre, as he applies his characteristic unconventionality to it. Aurelian changes the zombie genre to accommodate the first-person narration and have Ripper the Clown as the main character. In his children’s book, Pete the Picky Piranha, he subtly interjects with adult humor, ensuring that the book is appropriate for children, while still providing entertainment for their parents.

Aurelian shows no fear when it comes to experimenting with his writing, as he breaks down the fourth wall in many of his books, going so far as to blatantly telling his readers what kind of music to envision for a particular scene. Aurelian is also an expert in taking true events and fictionalizing them into his works. Even with the knowledge that five of his books are fiction, readers are often left wondering what is real and what is made up, as the lines between the two are ingeniously blurred.

This unconventional nature of his books can also be found in his comedy, during which Ripper the Clown takes over.

Ripper the Clown had his first appearance in Aurelian’s novel, Dead Wrestlers, Broken Necks & The Women Who Screwed Me Over. At that point, Aurelian had no expectation that Ripper would become the full-fledged character that he is today. With only two lines of text dedicated to him during this first appearance, it’s fascinating to see how Ripper the Clown has since grown. His name appeared again in one of Aurelian’s 2012 novels, Living Well Is the Best Revenge, but this time as a stand-up comedian. Around that same time, Aurelian was working on a short story that he had originally intended to include in his book, We Leave with Our Guns Out!, which also incorporated Ripper the Clown as a comedian. Instead, Ripper the Clown joined Aurelian in the real world. “I just had this weird epiphany that I’m not going to publish this story, but I’m going to go and perform it!” Aurelian said.

Subsequently, on Halloween of 2012, Aurelian got up on stage in his clown get up and performed material from his books. This marked the birth of Ripper the Clown as a real-life character, as well as Aurelian’s comedy career. “I could tell the audience was loving it, and I was just thinking to myself the whole time, ‘Okay, this has to continue. This can’t be a one shot deal as I’ve planned it. This is not just a Halloween thing. This is something that I’m going to have to continue to do.’” Aurelian said.

Although he has inevitably encountered discouragement during his career as a comedian, Aurelian describes the local comedy scene as one that ultimately allows comics to have stage time, find their voice and experiment with their materials. He finds it an incredibly rewarding experience, even describing his relationships with several comedians as almost familial. These comedians include: Allen Lewis, Charlie Hester, Chris Hightower, Rich Castle, Rick Omundson, Rich Wentz, Matt Sylvain and Andrew Voris.

It wasn’t until a year later that Aurelian truly became comfortable with his alter ego and realized the extent to which Ripper the Clown had his own identity. “In 2013, I went as Ripper for Halloween, and I had people coming up to me, not saying ‘cool costume,’ but ‘Who are you?’ and ‘What do you do?’” Aurelian said. “It was differentiated that this wasn’t a costume. It was that night that made me realize that I was becoming very comfortable with the character.” The makeup for Ripper the Clown is inspired by Aurelian’s good friend, Matt Borne, who played Doink the Clown for over two decades. “In the makeup, I’m paying respects to him and what he created and his inspiration in my life,” Aurelian said.

As a comedian, Ripper the Clown offers thoughtful, cerebral and always edgy performances while also incorporating a healthy dose of the ridiculous and absurd. Diverging from the all-too-common crude and sexist humor in which many comedians these days indulge, Ripper the Clown delivers comedy sets that are refreshingly just the opposite. Listing classic comedians such as Charlie Chaplin, Dick Van Dyke and John Belushi as some of his inspirations, Aurelian said, “Their work couldn’t be nasty or laden with foul language to get cheap laughs, and you know what… they got laughs with situational and relatable humor via their expressions and mannerisms.”

Aurelian hopes that Ripper the Clown can continue to grow, as he sees mainstream potential in the character. Aurelian is open to the idea of his books being turned into movies or Ripper the Clown becoming a character on a TV show. Aurelian’s newest novel, The Life & Mimes (& Zombie Apocalypse) of Ripper the Clown, won second place at the 2014 Hollywood Book Festival, a festival that honors books that the judges feel should be adapted to movies or TV shows. Aurelian’s novel Living Well Is the Best Revenge also won first place at the Hollywood Book Festival in 2013.

All of Aurelian’s books can be purchased on Amazon.

Ripper the Clown’s comedy performances can be found on YouTube on his channel, Rippertheclownshow. He is also active on Facebook at https://facebook.com/ripper.theclown.