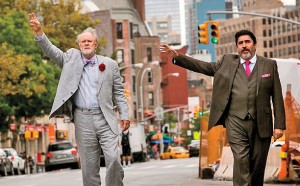 After spending 39 years together, Ben (John Lithgow) and George (Alfred Molina) finally decides to go through the formalities of getting married. The honeymoon is short-lived, as George is fired from his teaching position at a Catholic school due to his new marital status. Without a steady income, Ben and George are forced to sell their apartment and move-in with relatives, Ben with his nephew’s family and George with some generous gay couples that live in the same complex. Love Is Strange is director Ira Sachs’ heartfelt commentary on the difficulties of maintaining love and managing intergenerational conflicts.

It’s not long until George starts to find his living situation uncomfortable, as he struggles to connect with his much younger roommates that are more keen on spending nights partying than sleeping. Ben doesn’t have it much better. His nephew’s family is mired in relationship issues and the last thing they want is Ben butting in. These issues combine with the stress and loneliness associated with tearing apart a couple that has measured their relationship in decades.

Ira Sachs isn’t trying to create a melancholic drama about old people. Rather, by separating Ben and George, Sachs shows us the intricacies and nuances that come with love. While they’re both trying to adjust to their new living situation and relationship dynamic, their bond with each other is constantly in the background.

Even at 90 minutes, Love Is Strange feels lengthy. A deliberately slow camera that lingers in the scenery after the characters move out of frame is reminiscent of Yasujiro Ozu’s style. It adds a weightiness to each interaction and a sense of realism to each sequence. This realism in filming is juxtaposed with edits that skip days or even months. Sachs is far more concerned with connecting scenes that flow thematically than with maintaining a consistent chronological structure. This emphasis on scenes connected by subject matter across swaths of time makes the film analogous to the human perception of life, defined by select moments of detail in between days or weeks of mundanity.

Characteristic of many recent art films, Love Is Strange shows little action, but tells a lot. In the days that Sachs skips, major events occur that are glossed over, yet Love Is Strange puts scenes of mundane tasks, such as eating and sleeping, on center stage. It’s through routine activity that the bubbling issues of age and health, family and friendship, and time arise.

These broad issues are covered in a careful and selective manner. Ira Sachs acknowledges the limitations that one narrative can provide and chooses quality over cramming too many ideologies. Love Is Strange delivers a powerful slice of the myriad of issues that not only face the elderly or gay, but all couples in modern society. Sachs, through Love Is Strange, may not have all the answers, but he asks all the right questions.