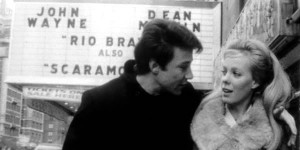 Harvey Keitel and Zina Bethune in Who’s That Knocking at My Door? Used with permission from Trimod Films.

Unlike his fellow New Hollywood directors of the late 1960 to early 1970s (such as Francis Coppola, George Lucas, William Friedkin and Steven Spielberg), Martin Scorsese took a much longer time to realize blockbuster box office success. Despite exceptional critical reviews for Mean Streets, Taxi Driver and Raging Bull, these films did only modestly at the box office. It wasn’t until mid-career, with the 1991 remake of Cape Fear, did a Scorsese film reach well over $180 million, an achievement his most recent films have found. Since there will not be a new Scorsese film released this holiday season, it’s an ideal time to discover his earliest feature film, the 1967 gem Who’s That Knocking at My Door?, the film that introduced his frequent star Harvey Keitel as the conflicted Italian Catholic protagonist, J.R.

Originally titled I Call First, Scorsese’s screenplay is recognizable from the film’s opening sequence, when you see signs of familiar Scorsese elements and themes repeats in numerous films: an ethnic grandmotherly woman feeding a family of young children around a dinner table, Catholic iconography throughout the room, and J.R. meeting friends on the street as a fight breaks out with a rival group. Scorsese shoots in the style of a roughly made black and white documentary, with hand-held camera movements, zoom close-ups and tightly framed scenes. Michael Wadleigh (director of Woodstock) and Richard Coll, the cinematographers, capture the noir-like night scenes of New York with gritty realism. This film’s brisk pace is realized by the editing of Thelma Schoonmaker, the first of their many years of successful collaboration. The film’s visual style is very reminiscent of several John Cassavetes films of the 1960s.

What follows is a casual, slightly episodic “slice of life” narrative with two focuses concerning the exploits and leisure activities of J. R. and his buddies in their Little Italy neighborhood and J.R.’s developing relationship with a college-educated blonde woman. The guys hang out in the local men’s social club, drive around listening to popular tunes on their car radio and drink in the local bars picking up pretty gals.

J.R. meets the woman while waiting for a ferryboat ride. After, they discuss international magazines, films and favorite things to do. Later J.R. explains to her his distinction between “girls” and “broads.” A broad, he says, “You play around with them; you don’t marry a ‘broad.’” As the relationship progresses, J.R. becomes confused with his passion for her. If she lets him sleep with her, she’s too easy, like a “broad.” He wants a passionate woman, who respects his religious beliefs and will save herself for him alone. Their love for each other grows until the woman reveals a horrible incident years before when she was raped by a man she dated.  J.R.’s attempt to reconcile his girlfriend’s (Zina Bethune) revelation becomes the crisis he must face.

Scorsese layers his narrative with lots of overlapping sounds and images reflecting J.R.’s thoughts, as well as songs that thematically comment on his situations. The film showcases the interesting intensity of the young Keitel that Scorsese would utilize in so many other films of the ’70s and ’80s. Film fans will also note Scorsese’s fascination with many John Ford an John Wayne Westerns, as J.R. refers to The Searchers and its iconic hero Ethan Edwards, and Lee Marvin’s tough guy in The Man Who Shot Liberty Valance. Who’s That Knocking at My Door? may seem rather crude and rough, but it marked the beginning of Scorsese’s remarkable career.