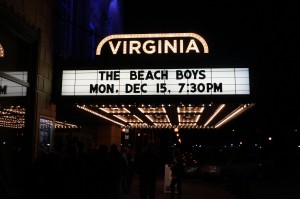 Fans clapped as the Virginia Theatre lights dimmed and an image of an old radio faded onto the screen. “Surfin’” began to play and the crowd’s claps grew in unison to the Beach Boys’ 1961 hit – it was the first single the band ever had.

A communal “Oh!” rang out among the Champaign crowd as The Beach Boys went straight into the song in perfect time with the video. The satisfyingly shocking note was the first in a lengthy set. And if you paid the $59.50-$99.50 it cost for a ticket, it was worth it.

The Beach Boys busted out a 42-song set Monday night. The band only stopped playing for a 15-minute intermission and had limited breaks in between songs.

The California-native band played “all the hits,” as you’d expect at this point in their careers. With 71 singles released in the band’s history, it’s pretty hard not to.

While the show lasted about two and a half hours, there was little down time in the set. After five decades, The Beach Boys know how to work a crowd with their setlist and it was evident in its planning.

The first major moment in the set came in a three-song run that had the band play, “Don’t Worry Baby,” “Why Do Fools Fall in Love,” and “When I Grow Up (To Be a Man).” The string of tracks was an impressive showing of the band’s ability to still hit harmonies with minimal effort.

The Beach Boys have somehow remained consistent through nearly all 53 years they’ve been a band, and Monday night’s set at the Virginia Theatre showed why the band is still able to tour. Although there’s an obvious lack of movement from the 70 year olds in the band, there’s no lack of energy. The seven-piece were all-smiles the entire set, telling jokes and interacting with the crowd throughout – whether it was simple waves or stiff dance moves.

The band was genuine entertainment throughout the show. Continuously joking about the age of each song, frontman Mike Love had a healthy spirit about him – even holding out a note so long the crowd erupted into cheers as he jokingly took deep breath.

The seated crowd – which averaged in age somewhere around old as hell – rose to their feet during the band’s final stretch: “Surfin’ USA” into “Fun, Fun, Fun,” and then ending it with “Kokomo.”

There’s no question The Beach Boys are so far ahead in their careers that those who came to see them would have difficulty finding any fault in the performance. The quantity and quality of years the band has put in has etched them into a small group of artists that can rest easily in fans’ nostalgia, but The Beach Boys go beyond this, still proving miraculous in performance.

In a Midwestern theatre filled with smiles, the California boys (there’s something about them – maybe the nostalgia – that still allows you to call them boys) were simply still on top of their game. But as The Beach Boys rang out harmonies in “When I Grow Up (To Be A Man),” black and white pictures from throughout their 53-year career flashed in the background and fittingly, the band sang it best: “Kind of sad/Won’t lost forever.”