William Shakespeare’s Pericles, Prince of Tyre is a rarely-performed romance written late in his career (1607 or 1608) and is one of his more enchanting tales. Outside of Great Britain and Canada’s Strafford Festival, it’s normally unlikely that you would see this play performed. With fond memories of Barbara Gaines’ late 1990s production of Pericles, it’s wonderful to note that Chicago Shakespeare Theatre at Navy Pier has restaged this tale under the direction of David H. Bell and starring Ben Carlson, company member of the Strafford Festival. 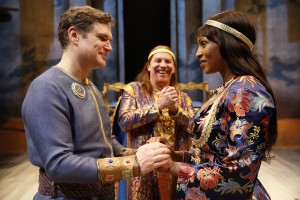 Pericles is a rather exotic travelogue of sorts, set in several Eastern Mediterranean countries and featuring Middle East and Asian opulence (what used to be called Oriental charm). It concerns the adventurous experiences of Prince Pericles, who first visits the kingdom of Anitoch as a suitor to the king’s lovely daughter. Then after escaping a trap and death threat by the king, he flees to Tarsus, where he discovers the once great land is suffering from famine and he offers them grain.  Setting sail again he encounters a terrible storm and washes ashore on Pentapolis, where there is a competition for the hand of Thaisa, the daughter of King Simonides. Pericles is successful in the tournament and wins Thaisa’s heart. Free to return home more tragedy befalls Pericles when another storm takes Thaisa, just after she gives birth to their daughter Marina. The painful grief seems too much for Pericles and has Marina cared for by others. Sixteen long years pass and the numerous paths and twists of faith offer to bring the family together again.

Director Bell and scenic designer Scott Davis imaginative sets very effectively create the worlds of Pericles’ adventures on lands and seas. Carlson’s Pericles is a uniquely likeable character whose pains and joys we feel intensely.  Other ensemble members of noteworthy mention are Lisa Berry’s Thaisa, Kevin Gudahl’s King Simonides, and Ross Lehman’s dual roles as Cerimon, the seer of Ephesus, and Pander. Their acting prowess, voices and diction were in top form. My only regrets with this production were with the casting and handling of the character Marina. The rather mundane depiction of her kidnapping, dangerous plights and ultimate fate needed to be more visceral and satisfying.

This handsome production of Pericles is exactly what Chicago Shakespeare consistently does so well over their quarter of century of existence. They bring such life to lesser known works of Shakespeare giving them the same treatment audiences expect of the masterworks of his canon like Hamlet, King Lear, Macbeth and Julius Caesar. The Oxford Companion to Shakespeare notes that Pericles “remains one of Shakespeare’s least revived plays.”

Pericles will run at Chicago Shakespeare Theatre on Navy Pier, at 800 E. Grand Avenue on the lakefront until January 18. For ticket information, call the box office at 312-595-5600 or go online at chicagoshakes.com.