Chicago’s Steppenwolf Theatre is premiering a new work by New Orleans native Lisa D’Amour, Airline Highway, which takes some of New Orleans’ traditions and realigns them from the perspective of the city’s underbelly. Its gritty, lower-class characterization produces some vivid characters and a mildly engaging story. But, even in the hands of one of New York’s top directors, there is too often little compassion for these depressing lives and a very unsatisfying ending as we experience the ultimate inversion of Grand Hotel.

It is The Iceman Cometh meets Bus Stop with the Hot L Baltimore and then some, served up New Orleans’ style in a seedy motel along southern Louisiana’s Airline Highway. This highway is a 115 mile long road that joins US 61 south of New Orleans to US 190 at Baton Rouge. It also connects New Orleans’ Louis Armstrong International Airport to the city and its environs and runs along Baton Rouge’s Metropolitan Airport as a connection road as well, hence its name. All varieties of tourist accommodations lie along this well-traveled route and many of these lesser-stared motels house permanent or semi-permanent residents from the city’s lower class jobs. Here the characters from Airline Highway reside at the run down Hummingbird Motel. 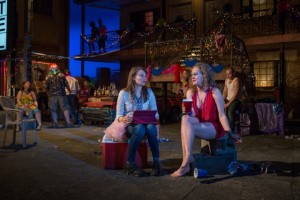 The exposition in Act I gives a nice introductions to the core characters and sets up the focal point of the story, a “living funeral” for a dying resident who is one of the French Quarter’s legendary strippers. It’s a classic New Orleans’ celebration of life that makes their funerals so special, but here we get life and death from the underbelly of society. Add to that the return a former resident and his journalist stepdaughter, who upsets what promised to be a smoothly flowing party.

Tony Award director Joe Mantello is one of New York’s “A” list directors and this play is headed for Broadway and the Samuel J. Friedman Theatre in April, but perhaps some clarity should be added to Act II before the Great White Way experiences this new play. The second act descends into a mass of characters, limited exposition, and a very unsatisfying ending that could use some clarity. Worse than that the characters you thought you liked get progressively more unlikeable, and you struggle through a murky second act with almost no one to root for.

As a work in progress, this script is surely in the process of refinement and it has a great director staging it. Lisa D’Amour clearly knows the territory and people she writes about having spent her formative years in the Crescent City, and there is much promise in this script, especially in Act I. Scott Pask’s set is a superlatively atmospheric design that will have you wondering if you are possibly outside a real motel. Here is a real contender for a Tony Award in the design category.

Airline Highway will continue at the Steppenwolf Theatre at 1650 North Halsted in Chicago until February 4. For further information go to: www.steppenwolf.org. Or you can call—312-335-1650.