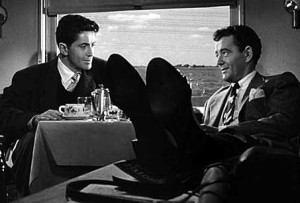 Farley Granger and Robert Walker in Strangers on a Train. Used with permission from Warner Bros.

After a decade of working under the restrictive demands of the studio system in the 1940s, Alfred Hitchcock declared his independence, becoming a true “auteur” filmmaker. He began producing his own films and thus achieved the right to select screenwriters, casts and crews and achieving the much-desired “right to final cut” of his films. His 1951 adaptation of novelist Patricia Highsmith’s Strangers on a Train is one of Hitchcock’s finest films, but one regrettably overlooked at many retrospectives, like the Virginia Theatre’s week-long, mid-autumn Hitchcock tribute last year.

Strangers on a Train concerns the coincidental meeting of two men on a passenger train heading out of New York’s Penn Station. One is a famous tennis star, Guy Haines (Farley Granger), and the other a bored rich guy with incredibly outrageous fantasies, Bruno Antony (Robert Walker). After sharing idle conversation and a brief meal, Bruno reveals his idea of the perfect murder. Taking into consideration Guy’s recent marital problems with his estranged wife, Miriam, and Bruno’s contentious relationship with his father, Bruno proposes a plan that virtually eliminates the legal motivations for murder — if each man does the other’s murder. Bruno offers to kill Miriam if Guy reciprocates and kills his father. Guy would then be free to marry his present love, Anne Morton (Ruth Roman), the daughter of an esteemed senator (Leo G. Carroll). Guy, who humors Bruno’s obviously ridiculous scheme, laughs off the idea and says farewell, getting off at his planned stop.

When Bruno commits Miriam’s murder and police begin to suspect Guy, the narrative reveals many of Hitchcock’s standard themes: the innocent, wrongly accused protagonist; the eventual transference of guilt; and the charming, creative villain who manipulates circumstances to keep the law off his trail. The screenplay, adapted partly by famed crime novelist Raymond Chandler, seemed an ideal fit for the Highsmith story. But according to the Francois Truffaut’s mid-1960s interview with Hitchcock, the relationship with the director was not good at all. Donald Spoto’s 1980 biography The Dark Side of Genius further notes that “Hitchcock’s insistence that the script adhere to visual requirements” may have been the main cause for the collaborative breakdown.

Like Shadow of a Doubt, Hitchcock’s focus in Strangers on a Train is on the pair of central characters, their seemingly similar problems and psychological desires. Bruno has been described by others as the shadow of Guy, the uncontrolled dark side who acts on his murderous desires. One of the many showcase sequences in the film is the nearly seven-minute murderous pursuit of Miriam at a small-town amusement park. Here Hitchcock follows his trademark method of manipulative suspense building, in which the audience is made aware of more information than most of the characters on the screen. Miriam (Laura Elliott) is out for the night with two young men, one who clearly appears to be her new boyfriend. But as Bruno slowly pursues Miriam to a secluded part of the park grounds, Miriam, who is aware of Bruno’s presence, seems to even flirt with him as he follows the trio onto a merry-go-round and a boat ride through the Tunnel of Love to a dark little nearby island. Walker is brilliant as Antony, creating one of Hitchcock’s smoothest psychotic villains.

Shot in a low-key, shadowy, black and white film noir lighting style, Hitchcock’s camera visually casts doubt on several of the characters’ perceived innocence and duplicities. The film marked director of photography Robert Burks’ first of a 12-film, nearly 15-year collaboration with Hitchcock. Burks’ exceptional cinematography was the film’s only Oscar nomination in 1951. Strangers on a Train remains a Hitchcock classic, a hidden gem not to be overlooked in 2015.