Gone are the days when we’d sleep in until noon, laze around in the afternoons or stay warm under our blankets, drinking hot chocolate while watching Netflix. As the spring semester rolls in, it’s time we roll out of our beds early to make it to our morning classes AND attempt to stay warm.

It’s crucial that we take extra precaution in order to protect ourselves during these bitter cold winter days—especially with all the walking that is involved on campus, whether it’s from one class to another or to and from a bus stop or even all the way back to our dorms and apartments. 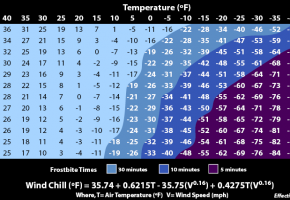 A chart for predicting frostbite. Image courtesy of wikipedia.org.

A common result of exposing bare skin to low temperatures for too long is frostbite. Frostbite, by definition, is a cold-weather injury caused to body tissues. It generally affects sensitive parts of the body, such as the nose, fingers and toes.

Frostbite occurs because the body’s first response to cold temperatures is to protect the inner organs, reducing the amount of blood circulation to these sensitive areas, causing them to eventually freeze.

The first step to recovering from frostbite is being able to recognize it. It begins with numbness, followed by the area on the skin turning red which gives off a burning sensation. Gradually, it will turn pale, which is a sign that it has progressed to a much serious state.

At this point, it’s best to use warm water or expose the area of the skin to body heat. It is, however, NOT advised that one hold up his/her frostbitten area over a burning flame, as it could cause long-term damage.

The worst case of frostbite is when the pain lasts for more than a couple of hours and dark blue or black areas under the skin are spotted. These symptoms require immediate medical attention as they may lead to gangrene: the death or decomposition of body tissue resulting from blocked circulation.

Frostbite can lead to permanent nerve and tissue damage if it’s not taken care of the right way. 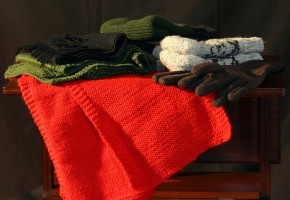 Make sure you bundle up during the winter months! Image courtesy of pixabay.com.

Some ways to combat the cold and prevent frostbite:

Spring is right around the corner, folks, but until then, stay bundled!