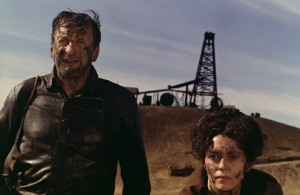 In the late 1960s and early ’70s B.M.S. (Before Meryl Streep), no actress was more popular in Hollywood than Faye Dunaway. In films such as Bonnie and Clyde, The Thomas Crown Affair, Chinatown, Towering Inferno and Three Days of the Condor and in her Oscar-winning role in Network, Dunaway was incredible. One film she was also quite proud of was Stanley Kramer’s 1973 hidden gem, Oklahoma Crude. Dunaway played Lena, a hard-driven woman who competes in the world of men in the oil fields of Oklahoma against the big oil companies who try take over her interests at nearly any cost. This Western adventure comedy featured an A-list cast also including George C. Scott, Jack Palance and John Mills.

Written by Marc Norman and shot by the famed Robert Surtees, Oklahoma Crude presents Lena Doyle as a turn of the 20th century feminist who initially defies her alcoholic father, Cleon (Mills), but later with his help hires “Mase” Mason (Scott), a drifter itinerant worker, to defend her wildcat oil rig against the Pan-Oklahoma Oil Company and their hired thugs led by the evil Mr. Hellman (Palance). After seeking legal advice from the town’s lawyer, who claims the big oil companies control the courts, Lena decides to fight the oil thugs with guns and grenades as she continues drilling on her land. Filled with period music by Henry Mancini and a catchy tune, ”Send a Little Love My Way,” Oklahoma Crude is a delightful little comedic drama.

In Dunaway’s autobiography, she reminisced: “The role was where I wanted to be. Lena was tough, an ambitious woman who was not going to bow to the male establishment. Very real this woman was, and that’s the direction I wanted to head my career in. I had come to a time in my life when I wanted to reconnect with my roots. I wanted to strip away the veneer of glamour that had attached itself to me and remind everyone that there was more to me and my talent than the slick, sophisticated, urban woman roles I seemed to be offered more and more.”

What attracted the also-popular, Oscar-winning Scott to the project, according to biographer David Sheward’s Rage and Glory: The Volatile Life and Career of George C. Scott, was its characters. Scott said: “They’re totally disparate people who become affectionate and needful. I get to play a ne’er-do-well, a no-account bum who becomes somewhat reclaimed.”

Stanley Kramer, who usually made serious, socially significant films like The Defiant Ones, On the Beach, Judgment at Nuremburg and Guess Who’s Coming to Dinner, was looking for an entertaining film that contained an opposites-attract romance, a sort of land-based The African Queen. The way he handled Dunaway and Scott created an unlikely but effective chemistry that takes an appealing romantic turn as Lena learns to trust Mase and he respects her.

While the film was not a box office success domestically, it became a surprise hit in the Soviet Union, where it received the Gold Medal at the 1973 Moscow Film Festival. Oklahoma Crude is a fine film its cast and crew should be proud of.