In the well-established tradition of adapting popular films to stage musicals, First Wives Club premiers at Chicago’s Oriental Theatre as it prepares for a fall Broadway opening. This new musical reinforces some old stereotypes, but with the help of a trio of superlative vengeful exes and many tuneful moments, there is much to enjoy here.

The source material is Olivia Goldsmith’s 1992 novel, The First Wives Club. It was one of a dozen books from her career, but The First Wives Club put her on the literary map, selling copies in the millions. Her books were comedic, but edgy feminist stories about how women could best survive in the battles for money and love. During her life, she was twice married and twice divorced and used four different names before Olivia Goldsmith appeared on all of her books.

The First Wives Club is about divorced women left by their ex-husbands for younger women who get even. It is no coincidence that Ms. Goldsmith wrote this novel just after her first divorce, where she claims her ex-husband got just about everything.

As she struggled through middle age and a personal obsession with aging, she continued her success as a writer, selling her first novel in 1996 to the world of film.

That film, also called The First Wives Club, grossed over 150 million dollars and made the cover of Time. Loaded with first-rate acting talent like Bette Middler, Diane Keaton and Goldie Hawn, this film and its story of women’s revenge really resonated with audiences. Its rich characters and comedic side were brilliantly adapted for screen by playwright Robert Harling (Steel Magnolias) and director Hugh Wilson. It was the hit waiting to be remade.

Now, it is simply called First Wives Club as adapted by Linda Bloodworth-Thomason from a 2009 stage adaptation by Rupert Holmes, and the narrative has a musical score by Motown legends Lamont Dozier, Brian Holland and Eddie Holland. Here are some of the most successful songwriters of the 1960’s and 1970’s back for a reunion with 22 new songs, and their artistry has never been more obvious.

Bloodworth-Thomason’s adaptation is loaded with edgy one-liners that really resonate with and preserve Goldsmith’s tough humor. But, her male characters (somewhat like to novel and film), are pure stereotypes of regressive male evolution. And those new love interests who bumped the first wives? They constitute a trio of bimbos who range from downright incompetent buffoons to dubiously ethical pseudo-professionals. OK, maybe regressive jerks make bad choices, but it does diminish the effectiveness of the story. 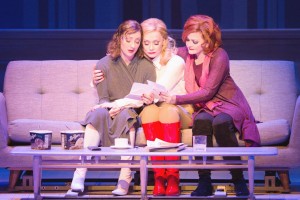 Carmen Cusack, Christine Sherrill and Faith Prince prepare to get even in First Wives Club at Chicago’s Oriental Theatre. Photo by: DJ Pierce.

The three revenge-seeking wives are played by three actresses who simply sparkle in every scene. They make a good case for their ex-husband’s bad choices. Carmen Cusack, Christine Sherrill (a Chicago-area native) and Faith Prince light up the stage with their singing, dancing and their terrific mutual chemistry. It is a superb ensemble delivery with three individual performances that standout, and, yet, blend beautifully.

This terrific trio of vengeful wives are aided by their superb settings provided by Gabriela Tylesova, whose gorgeous sets and costumes provide an appropriate eye candy for the upper class duplicity that permeates this story.

Simon Phillips’ direction and clever use of Holland-Dozier-Holland’s wonderful song score moves this 2 hour and 45 minute show (with the intermission) nicely. Director Phillips puts the right amount of energy, and a few additions to the book, to make this complex story understandable, laughable, and a joy to listen to. The issue that keeps emerging, tough, is this material dated?

1990s issues on love and marriage dated? Have we evolved that fast, that far? This may be a purely personal evaluation in our fast-changing world, but I can tell you from the point-of-view of my family, two of my nieces were recently divorced and received nothing but ex-husbands.

The Oriental Theatre is at 24 West Randolph in the heart of Chicago’s Loop. For further information go to: www.broadwayinchicago.com, or call—800-775-2000