Sympathy for Mr. Vengeance is the first in The Vengeance Trilogy by Park Chan-wook, a series that also includes (in chronological order) Oldboy and Sympathy for Lady Vengeance. It tells the story of Ryu, a deaf and mute factory worker who attempts to acquire a kidney for his dying sister. First, he tries to give her his own, but he’s not the right blood type. Then, after being laid off from work, he gives his severance money and one of his kidneys to black market organ dealers in exchange for a kidney of the right type. After the operation, however, he is left naked in the parking lot where he met them, and three weeks later, he can’t afford the operation for a kidney that just became available (not as a result of the black market organ dealers, mind you). Along with his anarchist girlfriend, he kidnaps the daughter (Yu-sun) of his ex-employer’s friend for ransom money in order to set things right.

Naturally, nothing goes according to plan. The aforementioned sister finds out what Ryu has done and kills herself, and while he’s burying her, the little daughter goes out into the lake that separates her from him, and she drowns. This sets the girl’s father (Dong-jin) on Ryu, and Ryu on the black market buyers. It all seems a little chaotic and meaningless, but Park Chan-wook crafts this piece so that no one is entirely blameless, even if they began the narrative that way.

First of all, the girlfriend. Not only is it her idea to kidnap the daughter, but after a scene where she and Ryu are seen after the daughter’s death, the next one is of her on top of him. She is riding him, not the other way around, attempting to move them both past this incident without being held accountable for it. In essence, she doesn’t do the “right” thing. 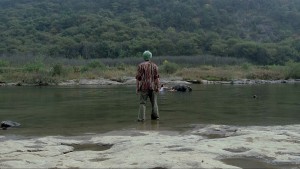 A glimpse into the world of this film.

Now Ryu, who we at first identify as the main protagonist. We see the entire crux of the movie as his jumping the gun, and we can completely understand that sense of helplessness and idiocy compelling him to go to extreme lengths to save his sister. Adding onto this, the girl drowning is almost no one’s fault. If he weren’t deaf, he would’ve been able to save her. But when he does turn around and notice her body in the water, he hesitates. He remembers a moment where he almost drowned. In this moment, he deserves everything he has coming (and I knew what he had coming, because the poster for it kind of spoils everything, and I made the mistake of looking at the film’s Wikipedia page before watching the movie). To make matter’s worse, the person with disabilities who caused the daughter to look to Ryu for comfort goes into the water in the same scene, even though he’s much more likely to drown than Ryu could easily drown. It’s for the wrong reason as he only wants her necklace, but it forever labels Ryu as guilty for not allowing the right reason to move him past that first step into the water.

And finally, we have Dong-jin, Ryu’s counterpart, and the person who the narrative gets behind just as Ryu becomes irredeemable. He acts as the second protagonist in the movie, and despite starting on an understandable quest of revenge, he takes it too far. While torturing Ryu’s girlfriend, he kills a man who delivers food to her apartment so that he won’t alert anybody, before killing her. Then later, when called about a boy he saves earlier in the movie dying, he says the person has the wrong number without a second thought. It’s the movie’s way of telling us how much he’s changed since the person he was right after Yu-sun’s death, and shows that, much like that boy, he can’t be saved now either.

Yet Oldboy is the one with the not-as-good American remake.