John Patrick Shanley’s breakthrough stage work, Doubt: A Parable, is back in the Chicago area again in a splendid new production at Glenooe’s Writers Theatre. The return of this award-winning play reminds us how powerful and universal the ideas of this brilliant story are, and how well-served they are under William Brown’s direction.

Shanley’s anti-establishment subtext emerged through his journey through Catholic schools in the Bronx. There, he experimented with various stages of rebellion and was eventually expelled from high school. He finished his secondary education at a Catholic Academy in New Hampshire where his teachers turned him from open rebellion to writing. Finally graduating from New York University in 1977 after a stint in the Marines, he experimented with short plays with little success. But in 1984, with Danny and the Deep Blue Sea, he registered his first hit.

Before the decade was over, he won an Oscar for Best Original Screenplay for Moonstruck, in which he celebrated the culture of the Italian-Americans he knew so well in the Bronx. In Doubt, he returns to those Bronx Catholic schools where he had such a stormy tenure. Here, a highly suspicious and rigidly traditional nun, who is also the principal of a junior high school, feels a priest maybe guilty of child abuse. Her unrelenting pursuit of this priest is the source of some stunning high-tension dialogue, but there is a real subtext here.

Set in the early 1960’s, when the Bronx was ethnically changing, Shanley recalls the tensions of his own neighborhood and how they affected his school. He makes it clear as well that the church can cover its tracks on scandals and the opinions of the women in the church mean little. Yet, as the events of this drama unfolds, it is unclear whether the accused priest, Father Flynn, is guilty of anything but being concerned and involved in his community. 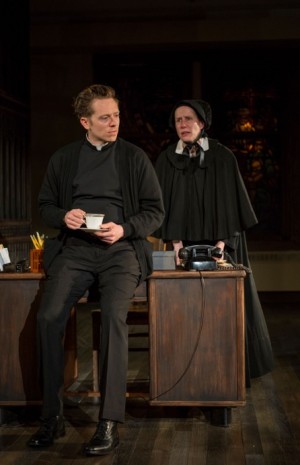 Director Brown gets strong performances from a four person cast who never resort to melodrama. Steve Haggard as Father Flynn, Karen James Wooditsch as the suspicious principal Sister Aloysius, and Eliza Stoughton as the young teacher Sister James are a trio of fascinating and dramatically engaging members of the religious community. But, perhaps, the best part goes to single scene on a parental visit.

The role of Mrs. Muller, the mother of a black eighth grade student, who may be too involved with Father Flynn, is a virtuoso piece of stage writing that a good actress can carry for a killer stage moment, and Ann Joseph does just that. In the tradition of Adrianne Lennox (Tony Award) and Viola Davis (Oscar nomination for the film), she masters that special moment of parental agony.

Scenic designer Kevin Depinet uses Glencoe’s Union Church (A Protestant church) and its ecclesiastical interiors and seamlessly creates the interior of a Catholic secondary school. An evening spent at this production will remind you why it won both the Pulitzer Prize and Tony Award in 2005.

Coda: In 2008, the film version of Doubt was released and all four leads received Oscar nominations, including Shanley for Best Adapted Screenplay. Stanley also directed. The film used Shanley’s Bronx neighborhood and a real Catholic school that Shanley attended for the shoot.

In a brief interview I had with Brian F. O’Bryne in 2005, he stated emphatically that the role of Father Flynn should not be played too malevolently because it is clear to him that he is innocent, and he originated the role. This is not shared by all directors as there is some doubt about this.

Doubt: a Parable, will continue as a production of the Writers Theatre at Glencoe’s Union Church at 236 Park Avenue, right across from the Metra Station. It will run until July 19.