If those summer cinematic adventures may not do it for you—if you are looking for something more cerebral than that mass of action films and sequels—there are summer specials on the stage that range from a mere hour from Champaign-Urbana to a day and half away.

An hour or so northwest of here is the Illinois Shakespeare Festival in Bloomington-Normal. Since 1978, this annual summer project, a collaboration between the College of Fine Arts and The School of Theatre and Dance at Illinois State University, has given our area an exceptional look at the Shakespearean classics along with a few extras. This summer’s season will run from July 1 to August 8 and will include more than one venue.

Most of the major productions will be at Ewing Manor in Bloomington, at their famous outdoor theater. The main events of the 2015 season are: Love’s Labour Lost, Richard II, and a satirical adaptation of Two Gentlemen of Verona by the Q Brothers, called Q Gents.

Be sure to check their website for further information on their extra features and additional venues—www.thefestival.org. Their box office can be reached at: 866-457-4253 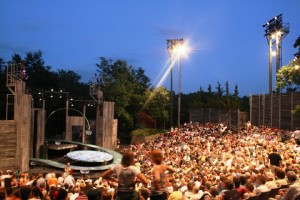 The Outdoor theater at the American Players Theatre. Photo by Carissa Dixon.

Six hours from Champaign-Urbana in the Frank Lloyd Wright country of the Wisconsin River valley, is the American Players Theatre in Spring Green, Wisconsin. Founded with a mission to focus on the classics, and especially Shakespeare, it has been bringing those classics to the public since 1980. Since 2009, they have added an indoor theater to their facilities and have extended part of their season into November. This year’s season will run from June 6 to November 22.

The 2015 season offers nine plays. In their wonderful outdoor theater, classics from Shakespeare’s Othello and The Merry Wives of Windsor to modern classics like A Streetcar Named Desire and Private Lives are on the bill. The indoor Touchstone Theater will stage more modern classics such as Edward Albee’s Seascape, An Iliad, as adapted by Denis O’Hare and Lisa Peterson and The Island by Athol Fugard, John Kani and Winston Ntshona.

Several weekend productions are already sold out, so plan your trip here with advance preparation as the American Players Theatre is hardly a well-kept secret. For further information go to: www.americanplayers.org.
The box office can be reached at: 608-588-2361. 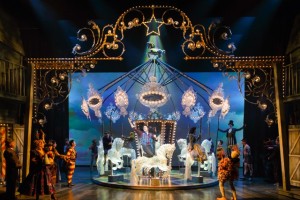 The ensemble of Stratford’s production of Carousel. Photo by David Hou.

To the east and a bit north by twelve hours or so is the Stratford Festival of Ontario, Canada. As their name and location would imply, their main focus is Shakespeare. However, there are a multitude of riches here, from musicals to expert guest speakers. Among the thirteen productions to choose from, there is a generous offering of the Bard’s best: Hamlet, Love’s Labour Lost, The Taming of the Shrew and The Adventures of Pericles.

There are musicals, with The Sound of Music and Carousel already in production, and ancient classics like Oedipus Rex to moderately aging classics like Oliver Goldsmith’s She Stoops to Conquer. Stratford has not forgotten the modern playwright with offerings like The Diary of Anne Frank and John Mighton’s Possible Worlds.

The season has already started in Stratford, Ontario and some productions will run into October. Extensions have already been granted to a couple of big-demand productions and more may be forthcoming. Check their website at www.startfordfestival.ca for the full schedule and the many extras the festival has to offer. Their toll-free box office number works from the US—800-567-1600 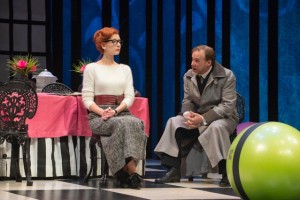 Julia Course and Patrick McManus in Shaw’s You Never Can Tell. Photo by David Cooper.

Three hours to the east in Niagara-on-the-Lake, Ontario is the Shaw Festival, the only such theater festival centered on the works of George Bernard Shaw. Shaw offerings this season include You Never Can Tell and Pygmalion. Musical fans have Sweet Charity to satisfy their cravings, and if you missed the wonderful and hilarious Peter and the Starcatcher, The Shaw Festival will offer both of these aforementioned plays until the end of October. There is a noontime time one-act of J. M. Barrie, the man who gave us the original Peter Pan. Barrie’s The Twelve-Pound Look deals with very different social issues.

A new translation of Ibsen’s The Lady from the Sea offers a new take on this unusual psychological drama, while Moss Hart’s wonderful Light up the Sky gives you the backstage drama of producing a drama. For those looking something different, Caryl Churchill’s Top Girls takes you on a tour of women who have made a mark in history.

For the full story of the Shaw Festival which is already going and will continue just into November, go to: www.shawfest.com. Their box office can be reached by a toll-free number from the US: 800-511-7429.