Few films are as stylized and visceral as those of South Korean director Park Chan-Wook. Park’s Vengeance trilogy, consisting of Sympathy for Mr. Vengeance, Oldboy, and Sympathy for Lady Vengeance, is a collection his fans have grouped together based on shared themes of retribution and similar narrative structure. In each of these films, characters are acted upon by disasters almost Kafkaesque in their absurd lack of justice: for example, Oldboy’s protagonist Oh Dae-Su (played by Choi Min-Sik) is captured by an unknown assailant and kept prisoner in a hotel room for 15 years, and in Sympathy for Lady Vengeance, a young woman is wrongfully convicted for a child’s murder.

Once these characters’ lives are ruined, they seek out their assailants with devious, cruel plots for revenge: Lady Vengeance’s Lee Geum-Ja (played by Lee Young-Ae) acts as a model of Christian charity to amass favors from each of her prison cellmates, so that they will each have to play a part in her elaborate plan against the real murderer, and Oldboy’s Oh Dae-Su, inexplicably released into Seoul after 15 years of captivity, follows a trail of clues left by his enigmatic oppressor to discover the crime for which he was punished. 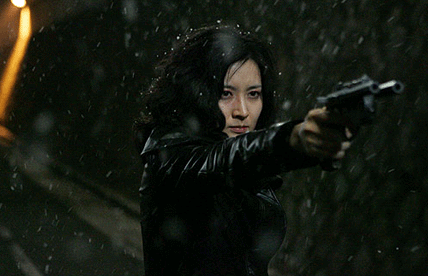 Lee Young-Ae as Geum-Ja in Sympathy for Lady Vengeance

In addition to directing all three films, Park co-wrote their screenplays. His strength in storytelling is that he deals up-close with the viscera of his characters’ actions, and what we get at the end of his cinematic meat-grinder is the raw emotion and physicality that result from his elegantly spun revenge plots. Characters intensely grapple with rage, despair, and pain, and no expense is spared on showcasing the bloody results of their work. Unlike the American equivalent many critics have compared Park to, Quentin Tarantino, it is this emotional rawness that distinguishes Park from many other cult directors.

Tarantino, for example, is content to fill his sets to the brims with blood as characters detachedly trade quips about pop culture, but Park fully invests his characters in the brutality they are part of. There is no such thing as a clean kill in Park’s films: rather, the violence is drawn-out, and frequently asymmetrical: much of Park’s violence features one character struggling to continue administering a terrible punishment, while the other pleas for forgiveness, forcing the audience into seeing the torrid results of characters’ desires for revenge as they are realized.

Ryu and Dong-Jin in Sympathy for Mr Vengeance

This dynamic is especially potent in Sympathy for Mr. Vengeance, in which the deaf-mute factory worker Ryu (Shin Ha-Kyun) tries to sell his kidney to pay for his sister’s transplant. Rather than paying him for the kidney, black market dealers steal it, leaving him to wake up naked on a city road. Desperate for cash, Ryu kidnaps the daughter of wealthy executive Dong-Jin (Song Kang-Ho) to extort Dong-Jin for the money to pay for the operation. When Ryu’s back is turned, the daughter accidentally falls in a river, and Ryu fails to hear her screams as she sinks under the water. Compounding the tragedy, when Ryu’s sister learns of what he has done, she commits suicide to stop him from sacrificing anyone else to save her.

Dong-Jin is desolate, and we see his grief at its greatest when he is forced to watch the autopsy of his daughter. The two characters go on parallel quests for revenge: Ryu tracks down the organ dealers that forced him into his fate, while Dong-Jin begins a quest to find and kill Ryu. By the story’s end, both characters are jaded by what they’ve had to do, a progression perfectly illustrated by Dong-Jin watching yet another autopsy, this time with virtually no reaction. When the two revengers’ paths inevitably cross, the violence is brief and unrealistic, almost as if it was shot as an afterthought. Rather, the main cinematic anchor of the scene is Dong-Jin breaking down in tears at the horror of what he’s forced himself to do to Ryu.

That said, when Park chooses to shoot drawn-out fight sequences, he does so with a merciless glee, and the prime example of his style is the now-trademark fight scene in Oldboy, shot entirely in one long take.

Park deliberately shoots the scene without cuts, from a side angle reminiscent of arcade fighting games. The effect is equal parts elegant and jarring: unlike video game characters that loose an endless supply of pre-programmed punches while navigating a level, both Oh Dae-Su and his enemies visibly lose energy and the will to fight as the scene progresses, with both sides gasping for breath at its conclusion. The elevator dings, showing Oh Dae-Su yet another mob of hired muscle, and the fatigue visible in his grin as he sets to work on the next level of bad guys perfectly showcases both his and actor Choi Min-Sik’s sheer exhaustion and dismay.

Chan-Wook’s direction plays with his characters and their position in vast plots and systems beyond their control. They are frequently depicted alone as people around them keep progressing through their quotidian functions, busy on their phones and at their jobs, oblivious of the protagonists’ anguish silently welling up like gunk in the gears of a vast machine. The tension between their misery and the indifferent world around them is best summed up when Oh Dae-Su quotes American poet Ella Wilcox at the end of Oldboy: “Laugh, and the whole world laughs with you. Weep, and you weep alone.”