This article is part of a new, weekly column on foreign punk. Each month will focus on a different country’s punk history. Each Monday will feature a different band from that country and a review of one of their albums.

This month’s series is entitled Paris Calling, featuring the best of French punk.

This week, we’re shifting away from French anarchopunk and taking a look at French folkpunk outfit Louise Attaque. It’s hard to put this band in that category – they, like many bands that combine folk and rock, move around between the genres sporadically. Even if they don’t fit the classic folkpunk mold, Louise Attaque is still worth mentioning for their unique sound and status as an iconic French band.

Louise Attaque formed in 1994 and found considerable success with the release of their 1997 self titled debut, seeing significant airplay on French radio as well as in the rest of the Francophone world. The band combines traditional French folk sound (derived from the French “chanson” genre) with a rock-inspired approach to vocals. Singer Gaëtan Roussel’s off-kilter, breathy vocals gave a unique touch to their music, helping earn Louise Attaque a large and dedicated fan base.

Their second release and this week’s featured review, Comme on a dit, took on a heavier, darker tone, which resulted in it finding less mainstream success. Still, the band’s sophomore album’s move away from their previously accessible, poppier sound made way for Louise Attaque to develop a sound that makes them one of the best, if not the best, contemporary French rock bands. 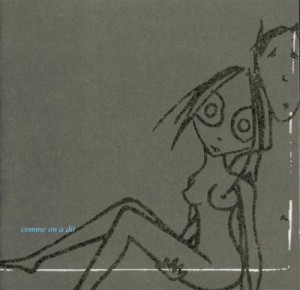 Gaëtan Roussel is one hell of a frontman. Roussel doesn’t need the posturing, the showboating of a typical frontman His unique, emotional vocals give the album an immediate punch, even during the slower, quieter songs. That being said, Louise Attaque are still at their best in the louder moments like “D’amour En Amour” and “Tout Passe.” Although the band moves away from the folkpunk genre at times, on songs like these they don’t pull any punches. On Roussel spits his words with a pained desperation that transcends language – no knowledge of the French language is required to recognize his skill.

If there’s ever a time where a violin could sound punk, it’s in “Tout Passe.” The violin carries the song’s main melody, screeching alongside the frantic drumbeat. Louise Attaque spend the rest of the album alternating between heavier folkpunk compositions and slower, more intimate composition.

“Justement” comes late on the album, building steadily from the violin’s initial refrain to a powerful, drum-heavy conclusion. The last two tracks slow things down to a relatively tame close, but the emotional power of the violin and Roussel’s honest vocals resonate long after the Comme on a dit ends.

It may not be the perfect example of a French folkpunk record in terms of style, but Louise Attaque’s sophomore effort remains one of most powerful, compelling and musically complex contemporary French albums.