The Steppenwolf Theatre Company’s main stage offering for this summer is Grand Concourse, a new play by Heidi Schreck. Schreck has made several significant contributions to off-off-Broadway venues in New York and Connecticut with her plays Creature, There Are No Big Secrets and The Consultant.

Grand Concourse is tale about a middle aged nun named Shelley (who doesn’t like to wear a habit) who runs a Bronx soup kitchen. This contemporary play has seemingly unlimited possibilities for character development and humorous predicaments. Especially as Shelley is facing a mid-life crisis of faith and purpose as she accepts the volunteer services of a young college dropout named Emma.

But this odd play has so many shifts in mood and erratic turns of characters’ behavior, it almost feels like a schizophrenic theatrical experience of comedy, anger, and a serious exploration into the lives of two depressed women. This briskly paced, 105 minute play, performed with only periodic blackouts to signal time passage and scene changes, never establishes a single consistent tone. Possibly this is the playwright’s attempt at representing the emotional states of both Shelley and Emma as the events of the narrative unfold. 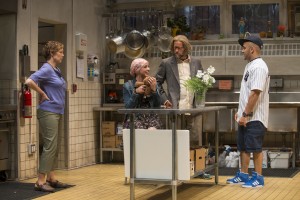 The play is set entirely in the kitchen of an old church. Yasen Peyankov directs a fine cast of four, lead by fellow Steppenwolf ensemble member Mariann Mayberry. Mayberry’s Shelley, who first appears as a fairly open minded, caring woman and dedicated to her years of feeding the needy of her neighborhood, is also testing her faith. She prays quietly in near her microwave oven, setting the timer for a minimum number of minutes to meet a satisfying measure of devotion.

Steppenwolf veteran Tim Hopper is Frog, one of Shelley’s daily customers, a drifter trapped in the 1970s, rather paranoid and unable to motivate himself. Victor Almanzar is Oscar, the parish’s all around “go-to” helper and enforcer; he serves, cleans up, and chases away punks who throw rocks at the church walls and windows. Finally, Brittany Uomoleale is Emma, the 19 year old who needs work, isn’t functioning with her mother, even has some health issues, but is significantly depressed and lies about her situation.

For a while, the presence of a new face, Emma and her enthusiasm, brings new hope to Shelley and certainly Oscar’s eyes are turned to the rather attractive young gal who likes to flirt. Even Frog is eventually inspired to clean up his act and apply for a job. Then, when the audience thinks they’re settling into a part serious drama/comedy, the narrative shift into darker areas. Shelley more seriously doubts her worth, begins using language unbecoming to a nun, her father is failing and needs hospice care. Emma reveals erratically disturbing truths about herself. Oscar’s text messages to Emma get him in trouble with his steady girlfriend, Rosa, and Frog is back to his old ways. Since this is all played out in relatively brief scenes and vignettes that last 7-15 minutes in length, an audience may feel this emotional roller coaster is not very pleasant, or rewarding.

This rather unpredictable Grand Concourse continues at The Steppenwolf Theatre, at 1650 N. Halsted St. in Chicago, until August 30. For ticket information go online at steppenwolf.org or call the box office at 312 335-1650.