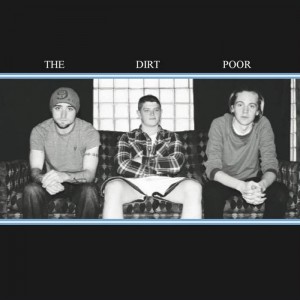 The Dirt Poor have been getting the ball rolling rather quickly since their start in January. With a fully produced self-titled album and shows throughout central Illinois, the Tolono-based trio has no doubt been working hard.

Authenticity is the most striking aspect of The Dirt Poor’s self-titled debut. The group sings from their roots: small town occurrences, making a name for oneself and of course love. Emmett Kuchenbrod’s rustic vocals fit like a glove over the distorted guitar, creating a distinct bluesy rock sound that’s easy to love.

Their single ‘Buy You A Home’ embodies the group’s characteristic sound – a strong melody intertwined with hints of 90s garage rock and grunge (and even a cowbell). The Dirt Poor’s spontaneity is expressed through numerous tempo changes – almost as if the band’s purpose is to ensure that the listener is engaged. These breaks in form keep the tracks fresh and alive – it’s impossible to predict what will come next.

The group has made singing about being bored sound empowering and the many modes of transportation sound exciting. The band’s laid back and confident vibe seeps out through each track, even though the words may not be lyrically groundbreaking. They express a particular bluntness, making it feel like they have nothing to hide.

With their self-titled release, The Dirt Poor leave a solid and enjoyable mark on the central Illinois music scene. Their organic use of instruments and complex songwriting means there could be more room for experimenting with different sounds and textures, and The Dirt Poor’s future releases have the potential to be even more impressive.