Children, students, adults and seniors gathered inside the William M. Staerkel Planetarium around 7 p.m. this past Saturday. As people shuffled inside and sat down in their seats, eyes were drawn to “Carl” the star machine, named after the Carl Zeiss Company that created it, centered in the middle of the room.

The planetarium, which is owned by the Department of Natural Sciences at Parkland College, was hosting an event called the “Solar System Safari”. David Leake, the director of the planetarium, gave a brief introduction about the event before launching into its presentation.

The safari themed space odyssey was narrated by a character named ‘Danger Dave’, an explorer with an Australian accent, which took its audience on a trip throughout the solar system. Danger Dave essentially interviewed the personalities of the sun, moon and each planet in the solar system. Each celestial object told Dave information about itself and depending on its personality would, for example, tell a joke or would blush in embarrassment by something Dave said. 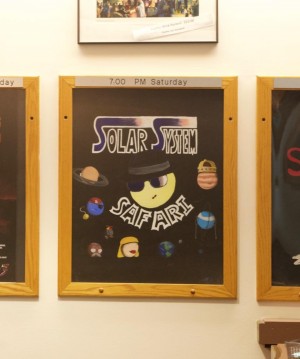 Leake, who also teaches an astronomy class and a physics class at Parkland College, said that the Solar System Safari was a great way to engage both children and adults alike in learning about our solar system. Leake’s astronomy class uses the planetarium up to 8 times a semester as a teaching tool; he even finds that some of his students visit the planetarium with their friends on the weekends. Leake has his own appreciation of the solar system.

There are a lot of other great events that are going on at the Planetarium beyond the Solar System Safari. According to Cindy Reynolds, the operations manager for the planetarium, the planetarium recently had an event called Pluto-Palooza on July 14. The event was centered on the New Horizons spacecraft. It had gone past Pluto, took pictures of the planet, turned around and “phoned home” to NASA. People at the event were able to sit inside the planetarium’s dome and watch NASA as the events unfolded.

“It was just like when they landed on the moon,” Reynolds said.

According to Reynolds, the government is no longer the only entity involved in space travel any more. One example is the Google Lunar X Prize, which is offering a reward to a team of students that can develop a spacecraft that can be stationed on the moon and report back scientific research. College electrical engineers are the ones who are in these teams and Reynolds said that the contest is very interesting.

Reynolds expressed her enthusiasm for working at the William M. Staerkel Planetarium.

“Oh, I love this job. You know you can work anywhere and either enjoy it or not; its up to you; but to me the diversity here is what’s enjoyable,” Reynolds said. “You know I can have a group of ‘Headstart’ coming in here, they’re only three or four years old. The group that comes in 45 minutes later can be a seniors group or an eighth grade group, you know. It’s a lot of fun.”