It’s rare to leave a play production and realize all aspects of its presentation you’ve experienced appear simply outstanding. The story is relevant and characters authentic; the acting is exceptional and believable; the direction is crisp; the lighting and scene design functional, yet intriguing, reflecting thematically on the play’s central focus. This is exactly how the Victory Gardens Theater’s production of John Logan’s Never the Sinner will affect you.

Director Gary Griffin’s cast of seven tell the incredibly chilling tale of University of Chicago students Nathan Leopold and Richard Loeb (18 and 19 years old, respectively) and their part in the 1924 murder of Bobby Franks, age 14. Logan’s play details the bizarre planning, rehearsal, execution and trial of the two wealthy Chicago young men who believed they were living proof of philosopher Frederick Nietzsche’s ideal “supermen,” a person who has a natural superiority to all others, who didn’t conform to the rules or conventions of society.

The play depicts Leopold and Loeb as intellectual, antisocial misfits who plan the murder of a weak individual as an “experiment of a perfect crime,” to see if they could get away with it, cover it up and manipulate others for the pure sport of the actions. Their sexual identities also play a role, as they enter a pact of matching an act of criminal behavior with shared sexual acts, for hedonistic pleasure.

Much of the play also focuses on the media/newspaper coverage of the lengthy trial and how the Illinois State Attorney Robert Crowe sought the death penalty for the two University of Chicago students. During the trial, famed Chicago defense lawyer Clarence Darrow is hired to present Leopold and Loeb’s case.

Darrow quickly changes the young men’s plea to guilty, thus making the sentencing not a jury’s decision, but that of the presiding judge, John Caverly. Through expert testimonies Darrow tries to show that Leopold and Loeb were products of a difficult transition from childhood to maturity, egocentric thinking and arrested emotional development, and thus didn’t deserve to be hanged for their misguided actions. The Tony Award-winning playwright Logan (2010 Best Play, Red) challenges his audience to question whether society is justified in using the death penalty to match a despicable killing with more killing. 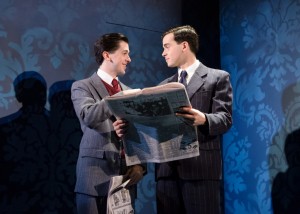 Image used with permission by the Victory Gardens Biograph Theater.

Leads Japhet Balaban as Nathan and Jordan Brodress as Richard are natural and unpretentious as the two confessed killers. Their performances clearly demonstrate their characters’ intellectual fantasies, intense passions and confused fascination of their egos. Keith Kupferer’s Darrow is no-nonsense, straight talker, yet compassionate in his pleas for sparing the young men’s lives.

Working with a simple set, (and a variety of projections of the locals of Chicago, the jail, and courthouse crowds), conceived by scenic designer, Kurtis Boetcher, with creative sound design effects by Andre Pluess, this story engages the viewer in a non-stop intensity of emotions and ideas.

This truly exceptional production of Never the Sinner continues at the Victory Gardens Theater, 2433 N. Lincoln Avenue, in the heart of Lincoln Park until December 6. For ticket information online visit victorygardens.org or call the box office at 773-871-3000. Don’t miss this exciting theatre experience.