All photos by Ryan Graves. 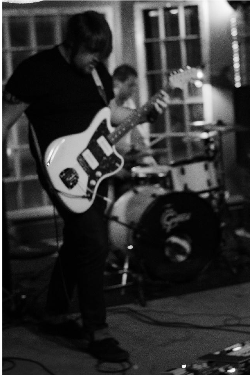 When the first band started to play, Earthholder, it was surprising to see that they didn’t have a vocalist. It’s definitely not the typical scenario of most to all bands you see,  but that shouldn’t stop anyone from seeing this band live because they rock pretty damn hard. They definitely have a heavier metal sound, and without a vocalist they have to compensate with heavy riffs, monstrous bass lines, and jam packed drumming. This just lets the crowd look into the actual playing skills of the band and Earthholder did not disappoint. Denton Hird’s riffs are some of the best that have been heard in Mike N Molly’s, which combine with Orie Turnbull’s strong bass playing style and the rapid drumming style of Caleb Knoblett to make for one heavy metal sound.

Next up was Chicago’s sewingneedle, another three piece band consisting of Calvin Fredrickson as lead vocals and lead guitar, Drake Jensen on the drums and Danny Cohen on the bass. There was nothing too special about this band besides the interesting Christmas song about Rockford, Illinois. Anyone that that has to go home to a smaller/non-Chicago town can relate to this song. The band has a unique sound and the vocals sometimes are like a casual conversation, as Fredrickson seemed to be talking more directly to the crowd during certain songs. Fredrickson definitely gave the band character, making conversation while on stage, yelling “hell yeah” while the other bands finished songs. Shows need that kind of charisma to keep the atmosphere lively sometimes, and that’s why sewingneedle has so much character and potential for the future. 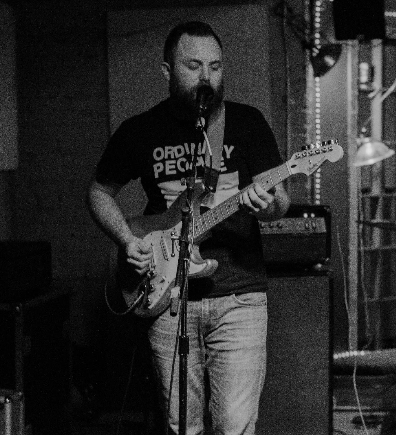 Euriah opened with songs from their recent EP like “Clock”, “All Good Things”, “Loose Ends” and “Composure”.  The photo above is  solely of Eric Stanley of Euriah because towards the end of the show he reached out to the small crowd before performing his last song in an effort to connect, telling us all about how the song was written in an attempt to describe the experience of dealing with addiction and hoping that through song he may be able to help others get through the same situation. It’s artists like this that are brave enough to make real physical connections with the crowd by putting all of themselves out there like that, and that takes some serious balls and deserves some serious respect. The band continues to gain respect by creating great music as well as fully putting themselves into the music emotionally.  With a solid, emotionally fraught performance like this, Euriah have definitely earned the title of one of the best current bands in the Champaign-Urbana area.

EDITOR’S NOTE: A previous version of this review incorrectly stated that Brandon Umbanhowar played the drums for Earthholder at this show, when it was actually Caleb Knoblett. This has since been corrected.