Sleater-Kinney are a force of nature. At last night’s show at The Old National Center in Indianapolis, starting with the opening bars of “Price Tag”, we were immediately – and constantly – reminded why Sleater-Kinney are one of the best rock bands in the world.

Behind the kit, Janet Weiss pounded away at the drums. Not at all graceful, she hit hard and fast and improvised impressive drum fills. Weiss is the musical backbone of the band, providing the necessary structure that leaves room for guitarists Corin Tucker and Carrie Brownstein to weave in and out with angular guitar riffs.

Brownstein had the presence of a rock legend. An incredibly physical performer, Brownstein rarely stood still. She was all perfectly timed high kicks, knocked over mic stands, guitar solos played writhing on the floor. Brownstein’s strongest performance of the night came during “Entertain”, where she took on a confrontational stance, leaning towards the audience, hand gripped tight around the microphone before knocking the stand over completely in an explosion of rock showmanship that was equal parts over the top and completely genuine.

Tucker embodied a different kind of wildness. She stayed rooted in place for most of the show, strumming carefully and without the cocky physicality of Brownstein. Tucker’s wildness is in her voice, an unmatched howl that sounds like it belongs in a sold-out stadium rather than a mid-sized concert hall. Tucker’s incredibly versatile voice stole the show during the encore, when she handed her guitar over to touring member Katie Harkin to sing “Gimme Love”. Before the song, Tucker led the crowd in a moment of silence for the victims of the Colorado Springs Planned Parenthood shooting and spoke about the importance of using art to create social change, ending with a battle cry for equality that proved that while Tucker and the rest of the band are riot grrrls no more, they still haven’t forgotten their roots. 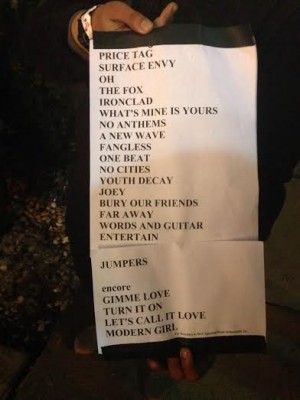 The band’s setlist pulled largely from their more recent catalog, with most of the songs coming from No Cities To Love and The Woods. Older entries “I Wanna Be Your Joey Ramone”, “Turn It On” and “Words And Guitar” proved that some of the bands earliest tracks hold up incredibly well, packing the same punch as their more recent entries. One notable inclusion on the setlist was “Faraway” off of One Beat, which until now hadn’t been played since the band’s reunion. It’s hard not to wonder whether or not recent events prompted its inclusion: after all, a song about how we respond to terrorism is just as relevant today as it was when Tucker wrote it following 9/11.

Towards the end of their encore, the band broke out “Let’s Call It Love”, their longest and most unpredictable song that culminates in a lengthy jam that’s nothing short of earth shattering. Every live version of the song is slightly different as Brownstein changes up her winding solo, meandering – around the stage and on guitar – but never quite getting lost. Simply put: Brownstein shreds with reckless abandon. But what makes this work is the grounding force that is Weiss and Tucker, who carefully fill in the gaps, preventing the song from losing its aim amidst Brownstein’s sonic exploration.

This is Sleater-Kinney: loud, wild, willing to take risks but never losing control. The band could’ve come on stage, played this song and left immediately and they still would have one of the best live shows around.

“You guys sing it,” Brownstein instructed the crowd during the closer “Modern Girl”, a reserved finish for such an exhausting set – a moment of stillness among the untamed wildness. As the audience sang the chorus, Brownstein grinned from ear to ear. Moments later, the band left the stage, leaving the crowd screaming for more, just one more song.

Sleater-Kinney haven’t given any indications as to what’s to come in the future, but based on the energy and passion they brought to the stage last night, they have so much more than one more song to give us.