In his five decades of writing for the stage, Terrance McNally has done much to broaden public awareness in many areas, especially American gay culture. Mothers and Sons (2013) is getting its Chicago area premiere at Skokie’s Northlight Theatre, and their production confirms that Mr. McNally is a powerful dramatist who can frame social issues in a format of a dramatic debate.

The play takes place twenty years after the death of Andre, a former long-time partner of Cal. Cal gets a surprise visit from Andre’s mother, Katherine, who has yet to come to terms with her unhappy life. A lot of that unhappiness stems from Andre death from AIDS two decades ago. Cal has since recovered his life, remarried to a man named Will, and they have a son.

Katherine cannot understand this lifestyle, but loathes her own traditional life, and her unhappiness spills into Cal’s and Will’s world like a hostile question period in an unscheduled debate. In 95 minutes with no interlude, McNally deftly explores two views of life, coping, and experiencing the aftermath of AIDS. 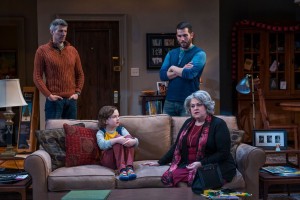 Director Steve Scott has staged many McNally plays in the Chicago area and his magic touch with the nuances McNally’s text is obvious everywhere. In a debate where the playwright clearly sides with the gay characters, all characters are treated sympathetically. He gets help from a fine cast that includes Cindy Gold (Katherine), Jeff Parker (Cal), Benjamin Sprunger (Will) and Ben Miller as their son. The constant dramatic exchanges come off as real conversations and this is no small achievement in a play loaded with so many subtle messages.

The design work of Jack Magaw (sets), Rachel Lambert (costumes) and Heather Gilbert (lighting) give this single set play the real feel of a New York City apartment for the interplay of these real life situations. This element of naturally-unfolding drama does much to enhance the effect of this production, a play that will test your emotions about a subject that still elicits strong emotions. To McNally’s credit, he tackles so much weighty emotion with rational exchanges, you marvel at the technique.

Coda: Despite Terrence McNally’s association with New York and the arts community, he is a journalism graduate of Northwestern University. He received an Emmy Award for a 1990 television script, Andre’s Mother, written as a prequel to this play. The Illinois premiere of Mothers and Sons was at Urbana’s Station Theatre last spring. See Syd’s review on the March 29 posting.

Mothers and Sons will continue at the Northlight Theatre at 9501 Skokie Blvd. in Skokie until February 27. For further information visit www.northlight.org or call 847-673-6300.