With that said, The Flick is an insignificant, three-plus hour exercise in tedium. The play pretends to be a rather melancholy, realistic picture of a film projectionist and two clean up/concession workers at a run-down, one screen movie theater in Worcester County, MA: one of the very last to show 35 mm films, on the verge of extinction in the digital age.

Theatre scholar Lee A. Jacobus defines “naturalism” as “the literary philosophy popularized during the 19th century that casts art’s role as the scientifically accurate reflection of a ‘slice of life.’ Naturalism is aligned with the belief that each person is a product of heredity and environment driven by internal and external forces beyond his or her control.”

With mundane dialogue (filled with endless vacuous exclamations, of “awesome”, “amazing”, “cool” and “whatever”) Baker’s play is a 21st Century neo-naturalistic slice of life that meanders in realistic chatter, while the audience witnesses in “real time” a pair of men sweeping up popcorn, picking up candy scraps, complaining about dubious waste on the floor and then wet mopping two aisles of six rows of theatre seats.

Once or twice is sufficient, but 8 or 9 times over two long acts is nearly unbearable. Sam is a disenchanted 35 year old, who still lives in his parents’ house in an attic room; Rose, who is paid slightly more as the projectionist, likes to party and has a mountain of college debt with little prospects; and Avery, who is rather soft spoken and nerdy, is a 20 year old who attends a local college where his father teaches. 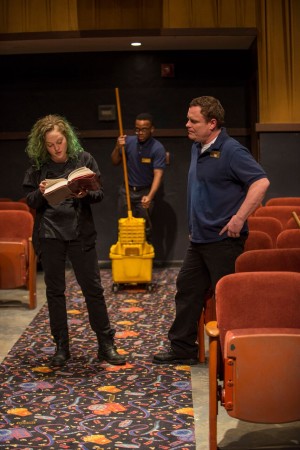 In the play’s first act, Sam is training Avery the routine of their end of the day cleaning ritual; they chat about the advantages of maintaining the purity of celluloid projection. The trio complains about the theatre’s cheap owner, Steve. The veterans reveal to Avery their “dinner money” scam, a scheme for recycling sold tickets and pocketing the money for food. Each worker is knowledgeable about movies, and makes a string of references to cult and art films of the past by Quentin Tarantino, Francois Truffaut and Ingmar Bergman.

To fill their time while cleaning, they play a six degrees of separation game connect two specific actors in a chain of movie pairing that eventually match. There is some sexual tension between Rose and Avery. By the second act Sam reveals he long repressed love for Rose and a new owner takes over and lots of things change—but superficially; the theatre is renamed The Venue, the workers get new yellow shirts and a state of the art digital projector is installed.

Baker’s play creates minimal empathy of her working class characters’ situations and repeats activities to the point of beyond the obvious. Is this an exploration of lost lives? A critique of technology that destroys the purity of the art of movies?

Oh, another surprise, Baker’s The Flick was 2014 recipient of Pulitzer Prize for drama.

The Flick is presented at Chicago’s Steppenwolf Theatre, 1650 N. Halsted St. until May 8. Ticket information for The Flick is available through Audience Services at Steppenwolf.org or by calling 312-335-1650.