Recently, we spoke with Jack Maples from the project called Total Asshole in regards to their Kickstarter project and how the new album is coming along. This is what we got.

buzz: Hey Assholes, how long have you been working on the new release?

JM: Recorded this tasty treat in January 2015 in a mad 4 hour rush and then attended to some other important projects (growing habaneros, brewing some brewskis, beating Super Mario World, etc) while slowly progressing on mixes and overdubbing new synth lines and other instrument touches (horns?) up to this point. The tracks are in a gnarly spot now and have grown into something pretty impressive, unlike the habanero plants.

buzz: What brand of beer did the assholes most consistently chug throughout the recording process?

JM: Piccadilly on First happened to be in the process of going out of business when I stopped in on the day before recording to grab brewskis and some burritos from Maize nearby, so I had the luxury of raiding the stock of miscellaneous bombers up front marked down 75% or some other arbitrary number I could make up right now. To my memory, we dug into some Trappist stuff, some big barleywine, and supplemented with some Millstream Schokolade Bock purchased from Common Ground (as featured in our Double Parked promo).

buzz: Can listeners expect the same type of asshole themed music to continue with this release? Will there be a more specific theme this time or still on an all out rampage?

JM: Expect some EEEEEE’s and KA-CHUNK’s and BOOOM BOOOOM BAAAAA BAAAA’s and DING-A-LINGY RING CHUCK CHUCK’s and power chords and can-smacks and string-breaking and voice-losing and aggression and rampage. The asshole never sleeps and never listens and only shouts and thrashes like a big babyman. Side A explores some of the more melodic and lyrical punk approaches and tells a bit more of the Asshole’s story, while Side B dives into a bit more post-punk and experimental noise with a massive first track taking over half of the side, with a dash of a manic, out-of-breath, roughly 250 BPM Happy (or not so happy) Birthday melody spit at you before finally diving into the punk anthem, “playin so loudly (that the neighbors wanna call the cops)” to close out the album in a fit of rage and angst and rebellion against seemingly nothing, probably everything, possibly just inner demons.

buzz: It looks like you’ve been recording in Ryan Groff’s studio, did he know about this or was this a felony?

buzz: Will this be a full length release for Total Asshole?

buzz: Your kickstarter packages are very unique, how did these ideas come about? Which items are you really hoping listeners will support? 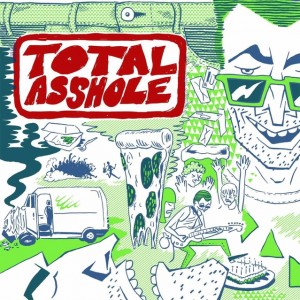 Artwork for Total Asshole’s upcoming release, made by Steve Schaberg.

JM: We’ve always salivated over the idea of combining Steve Schaberg’s incredible talent and specific art style with the concept of the Asshole and some of our lyrical elements from the songs. That match felt too good to pass up on for the actual production of the artifact. For the non-screenprinted production, we fell in love with the idea of blank jackets that we stamp with a massive stamp with a TOTAL ASSHOLE logo. Not only would it have a PUNK aesthetic, but we would then own a big stamp that says “TOTAL ASSHOLE” and we could stamp things with it whenever we want. The BBQ seemed like a great way to just share some appreciation in person for the support of backers, and get a chance to goof and get to know  each other and goof some more and of course, use people as extras for another music video we want to shoot. For the song recording, we’ve had years of people quickly catching on to the formula/concept of the band and suggesting “you know, you should really record a song about [insert goofy inconsiderate behavior].” We’ve got a recording studio in the basement of our house, so we figured it could be an easy enough and rewarding enough opportunity to give all of these people their dream TOTAL ASSHOLE recording. This band is all about making people’s most inspiring dreams come true after all. If you buy a show, we’ll have to learn how to play our instruments again, so maybe consider just buying 10 vinyl instead! If you likey the brewskis, come learn how to create them yourself. I will conclude by saying I really hope listeners just buy the music. That’s what the Kickstarter is really about. It’s a glorified pre-order, and we just want to get the Asshole Manifesto on people’s record shelves, because it’s truly something to behold. If a person has any interest in punk, or comedy/satire music, or local music in general, etc, this album has had an immense amount of work put into it and the recordings are truly pretty explosive and dynamic and give a really expressive tour of the different subgenres of punk rock.

buzz: Will the term “Douche-Canoe” come up in any of the new songs, can it?

JM: We may or may not be offering an option to have mean notes scribbled on the backs of record jackets by the Asshole himself in permanent marker, to make every one unique and personal. That’s where these types of phrases could perhaps make an appearance…

buzz: The band had a “last show,” does this mean more shows to come? Will there be a release show?

JM: Shows are available via the Kickstarter currently. A full band show has been backed that way, which may or may not function as a release show, pending further discussions.

JM: We expect to have the records in our hands sometime in late September.

Total Asshole have have exceeded their $1,550 goal and have currently raised $1,716. To donate or check out the new album’s preorder packages, head to their Kickstarter page. The fundraiser ends at 11 a.m. on Wednesday, July 13.