The aptly named Made Fest took place this previous weekend in Urbana-Champaign, as part of the much-anticipated Pygmalion Festival. For those who are unaware, the Made Festival features painters and other artists who work with more corporal mediums (books, prints, etc). The Made Fest featured a variety of artwork ranging from paintings to drawings to jewelry. Many of the artists shared their inspiration for their art, which included fears, personal experience, as well as encouragement from the lives of others. 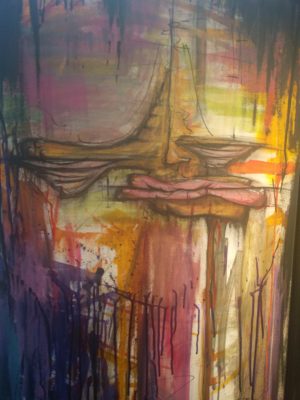 One such painter, Al Creamean, showcased many of his paintings at the Made Fest. Hailing from outside of Rockford, Illinois he has resided in Champaign-Urbana for the past five years, attending the Made Fest as an artist for the first time this year. Creamean spends his days as a Director of Assessment in a local psychiatric hospital. He states that he draws inspiration from “the fear that people have in confronting their emotions,” while specifying that the emotions projected on canvas are his own. He states, “it’s really about confronting those emotion and saying it’s actually there and not hiding behind it.” He cites artist, Ben Gregory, as a major influence. Creamean praises Gregory for his hunger to collaborate with others, stating “as soon as you talked to him [Gregory], he wanted you to be creative with him.” He incorporated this facet of Gregory’s work into the Made Fest by positioning a blank canvas at the entrance of his tent for passersby to paint on. His work is dark and beautiful, while demonstrating the contradictory and opposing forces that everyone has within themselves. It was refreshing to witness honest and moving work.

Artwork centered upon health was not a rarity at this year’s festival. Mara Natkin and the Gloria Ramirez are two artists who hope ”to encourage and inspire others to learn more about their bodies and take better care of them.” The two collaborated with an anatomy teacher and naturopathic doctor in their creation of a coloring book, which includes images of the human body as well as numerous facts and information about the body. They were encouraged to embark upon this three-year project after undergoing an enormous lifestyle change themselves. 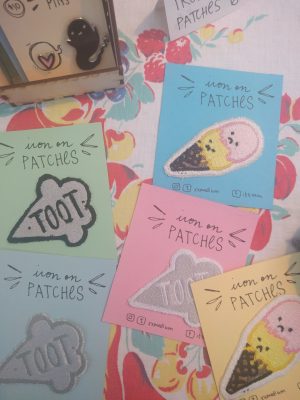 Artist Suzanne Linder is another newcomer to the Made Fest, who specializes in items centering upon words. Her experience working at the Fab Lab leads her to typically make items that can be mass-produced. However, Linder ensures that she doesn’t lose a personal touch as her favorite things to make are “presents for friends and family.” Her tent included a variety of items including vintage postage as well as many fabric-based works.

It is clear that each artist at the Made Fest sought to create a personal connection with their artwork, and encouraged viewers of their work to do the same. The subjectivity and individuality of art was impressed upon me, as I realized the work present at the Made Fest, varied by seriousness and medium, each made a strong impact upon me.