The University of Illinois’ Counseling Center and Department of Theatre has, as many are aware, sponsored the Inner Voices theatre troupe, since its inception in 1995. This semester’s performance will cover resiliency in the face of adversity.

The Inner Voices troupe consists of student actors and writers with an interest in theatre, stemming from a wide variety of majors, all whom contributed to the creation of the script. The theme of each show is based upon surveys completed at the end of the preceding semester’s show, asking audience members what they would most prefer to see in the upcoming season.

Whether their draw towards Inner Voices is from an appreciation purely for the art form itself, or due to the action of creation through devising, its clear that “So Far, So Good…Sort of” is a strong, meaningful peace that will resonate with audience members.

Michelle Fugiel, a member of the ensemble stresses that the work, “covers so many different topics”, an extremely notable feature, strongly rooted in the very creation of the piece. As aforementioned, Inner Voices creates pieces through devising, which is a collaborative method of theatrical creation. Newcomer to the troupe, Daisianee Minenger further emphasizes this unique method of creation, by discussing how all the students essentially created a list of different ideas to include in this semester’s work, ensuring that many viewpoints and stories would be represented in this semester’s work. Such a method of creation typically results in work that is highly relatable by audience members. 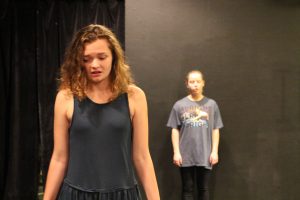 When asked about what they themselves hope to dive into in future semesters, a vast majority of the students expressed strong interest in politics, and not just those of a domestic nature. Wallace began discussing highly sexist political opinions persisting throughout Poland, including prohibition of abortion. Minenger followed up on this comment by stating her desire to further explore the “intersectionality of being a person of color” as well as a member of the LGBTQ community. Fugiel expressed that there is a clear disconnect between members of the LGBTQ community and those who aren’t, and they wish to better explore this disconnect. The discussion of potential future topics ranged across the board and concluded with Sullivan Peterson-Quinn’s interest in censorship; in particular, student censorship that takes place at this University.

Animateur director, Sam Smith has experienced first hand, the benefit of this troupe for students. After recommending further publicizing of the troupe to students who were going through a rough patch, he came to the realization that, “the idea that there is something like Inner Voices that potentially has that impact and connection with students” strongly benefits other students.

It is quite clear that the Inner Voices theatre troupe will deliver a deep and thought provoking performance on the various issues that we, as students face. As in years past, there is no question that it will instigate awareness and questions, encouraging audience members to leave with an open, and more educated view on the issues in question.

**Performances run from Wednesday October 12 to Friday October 14 at the Armory Free Theatre, and are accompanied by a discussion between actors and audience members post performance.