Lin Manuel-Miranda’s Hamilton arrival at Chicago’s PrivateBankTheatre as its first touring venue adds to the hype and near sensation generated around a musical based on a former Secretary of the Treasury.

OK, so, he was the first Secretary of the Treasury, but is his story that interesting? And can a modern hip-hop composer capture this story in a compelling way?

The answer to those two questions is unequivocally, yes. But, there is so much more to the story.

Original star, composer and librettist, Lin-Manuel Miranda was born and raised in “Uptown” Manhattan, just west of Hamilton Grange, the remnants of what was once Alexander Hamilton’s Harlem estate. It is now open to the public thanks to the National Park Service. With such tangible inspiration nearby, he read Ron Chernow’s excellent biography of Hamilton. 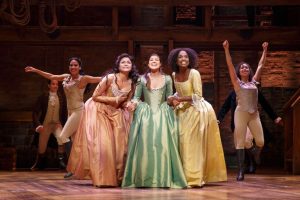 Looking for a second project after his outstanding New York-based first musical, “In the Heights,” he got hooked on this out-of-wedlock orphan immigrant who did so much. The result was this amazing and compelling musical that recreates Revolutionary War and early Federalist period history with hip-hop-based, R & B, Broadway music and unconventional casting. The rest is history.

After more than a year with sold-out houses on Broadway and just about every award a musical can receive, Hamilton goes national and Chicago is venue number one. It will be at the PrivateBank Theatre through next September. The great news is that Tony Award winning director, Thomas Kail, has brilliantly recaptured the high-energy performance that wowed New York audiences. His partner in performance polish and energy, Tony Award winning choreographer, Andy Blankenbuehler recreates that hip-hop performance style with Broadway moves that so electrified New York audiences. 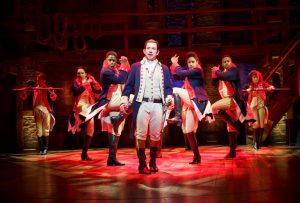 With so much publicity to the point where “Hamilton”-themed Halloween costumes are a big item, is there a series of myths about this show that just don’t make it into the factual realm? The answer to that is yes, and no. So, here is a fact check on Hamilton:

This Chicago company is every bit as good as the New York production. This seems to be true. “Hamilton” is not a star vehicle and Chicago leads Miguel Cervantes (Hamilton), Ari Afsar (Eliza Hamilton) and Joshua Henry (Aaron Burr) deliver superb performances. People who have seen both (I am not among them), say the Chicago cast is every bit the equal of its New York parent.

There no tickets available for the Chicago production of Hamilton except from ticket brokers like Stub Hub. False — “Hamilton” is pretty much sold out through mid-May according to the box office. But, a few premium seats are available for that time period. After May, there are seats available, but they are selling at a brisk pace. Tickets average around $200 with all fees. It is true that no more group sales are forthcoming and a strict limit of six tickets per household is enforced.

This is first musical to deal with American political figures. False — “Fiorello!,” which won the Pulitzer Prize and Tony Award (like “Hamilton”) is the Bock and Harnick musical bio of legendary New York mayor Fiorello LaGuardia. Irving Berlin chronicled Perle Meste, the US ambassador to Luxembourg in “Call Me Madam.” “Call me Madam” did use fictitious names and places though because Ms. Meste was still alive. “Bloody, Bloody Andrew Jackson” had a modest run in 2009 and 2010 on and off Broadway, but this mess of a musical history lesson by Alex Timbers and Michael Friedman is so full of errors, that its mediocre music is hardly worth it. 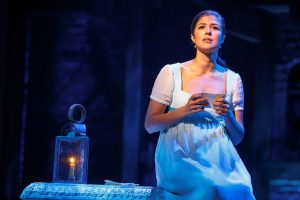 This is the first Broadway hit to deal with Alexander Hamilton. False — Sidney Kingsley’s 1943 drama, “The Patriots,” deals with the conflicts within Washington’s administration over national policy issues especially between Hamilton and Jefferson. There is a 1976 PBS production of this underrated play available on a dvd.

Because Lin-Manuel Miranda based his play on the work of an “A” list historian, Ron Chernow, “Hamilton” is totally factual. Mostly true — but, there are errors. One — the Marquis de Lafayette is shown fraternizing with Hamilton in a New York pub in 1776. Lafayette was in England in 1776, and did not arrive in the American colonies until the middle of 1777 when he stepped ashore in South Carolina. Two — Thomas Jefferson is referred to as the recent ambassador to France. His correct diplomatic title was minister. The United States did not create the diplomatic rank of ambassador until 1893. There are a few other ambiguous events, like when Hamilton resigned from Washington’s cabinet (two years before Washington left office), but most of what Miranda put in this show is true.

Better yet, most of “Hamilton” is enormously entertaining. It should be around as long as the Republic remains. The PrivateBank Theatre is at 18 West Monroe in the heart of Chicago’s Loop. Go to Broadwayinchicago.com for further information.