Sometimes playing in front of strangers feels more welcoming than playing at home. That’s how Free Kittens & Bread feel, at least. Justin caught up with the band during their February show at Blips & Chitz and talked about their Austin roots, Bob Dylan and what exactly inspired their name.

buzz: You guys are from Austin. What can you say about the music scene there?

Chase Spuriell: Well, the Austin music scene is… weird. We’ve been there for the past three years, trying to make a scene for our music, and it hasn’t gone well (laughs) There’s a bunch of different bands that are all trying to make scenes for themselves, but it just ends up being over-saturated. One of our first gigs in the area, we booked it, and we just couldn’t convince people to come. It was like, “Yeah, that’s cool you guys are playing, but look at all these other shows.”

So what we’re doing, this indie-punk thing, the closest thing to a scene we have there is the hardcore scene, which is really small. There’s a big psych-rock scene, hip-hop has gotten pretty big too, and then there’s the cover bands all over 6th street (Austin’s downtown “strip”) who are the only bands that really make money. Which sucks. So with all these different options, there’s not a lot of loyalty to any one specific bands. That’s part of the reason we’ve evolved, or maybe devolved, into just a touring band.

buzz: So if the hardcore scene is the closest thing to your sound, how does your sound go over with them? Any pushback?

CS: Well, it’s funny, because our last tour drummer was a hardcore drummer, in a lot of power-violence bands, so there has been some cross-over. We’re friends with the guys in the bands, and have played shows with them, and that’s really the best place we fit in I guess.

CS: Yeah, we take what we can get for people that are willing to play with us. I’ve kind of given up on Austin, as far as our band is concerned. We’re better at touring.

buzz: How about some of your sonic influences?

CS: Well, as a band, we take a lot of influence from Joyce Manor, Jeff Rosenstock, Bomb the Music Industry, Against Me!. But everybody brings their own thing. When I started the project, it was a lot more acoustic-based. I got out of college and didn’t know what to do with my life, so I was like “I think I’ll record this album in this shack that I have”, and called up Mark (Hawley, guitarist) and said “Hey, you want to join this band with me?” At the time, I was really into Bob Dylan and Leonard Cohen and the like, so a lot of that first album was pretty solo stuff. But then I moved to Austin, and as I was building the band around this idea, I found that the whole acoustic folk-punk thing just wasn’t working.

buzz: The Dylan influence really shows in a lot of your songwriting.

CS: Well thanks man. Yeah, I still don’t really consider myself a musician, more of a songwriter. My biggest thing is, like, words and shit. And he (Dylan) has so much material, I can always go back and listen to stuff to get some inspiration. What’s weird about Dylan is that when he writes, he says that music is more important than words. Which totally threw me, when I first read that. But it makes sense with his recording ethos, which is kinda just “Fuck it, one time through live.” So all of his records kinda suck, production-wise (laughs). But because of that, because the music doesn’t shine as much, the words do.

buzz: You mentioned that you’re more of a touring band than necessarily an Austin-based band. Does that ever leave you feeling kind of baseless?

Mark Hawley: Well, when we’re on the road, it seems like the crowds are friendlier, more into it, which might just be the promoters doing their job. There’s just not a solid foundation in Austin.

CS: Yeah, I mean, there’s just so many different kinds of music. Like I said, there’s so much music in Austin, a lot of which is just so good, that makes it hard to get people to come out to shows. So on tour, it can be better or it can be worse. It depends on where you are I guess. We’re into the whole DIY thing as a band, and when we play at places that share that kind of mindset, then it’s good. But Austin is just not very supportive to that thing.

Marcos Encinias: Yeah, the struggles of getting a good live scene together is not something that a lot of people going to shows understand. It’s a pretty lonely world.

CS: It’s just so hard to get a following. There’s no real built-in crowds, or places that have that DIY ethic. There’s only one that I can think of, called Shirley’s Temple, which is a warehouse that some people went in on strictly with the intention of hosting shows. It’s not making them any money, it’s really just making enough to sustain itself. But that’s kind of a rare case. Places like Blips and Chitz, these houses in college towns, it’s a lot easier to get some real support if there’s a place where people can consistently gather for good, original live music.

Billy Edwards: Yeah, Austin is not cool with house shows. Neighbors and cops are like “take that shit to a venue.” Our first show on the road this tour, in Belmont, Texas, was shut down right before we went on, which sucked. 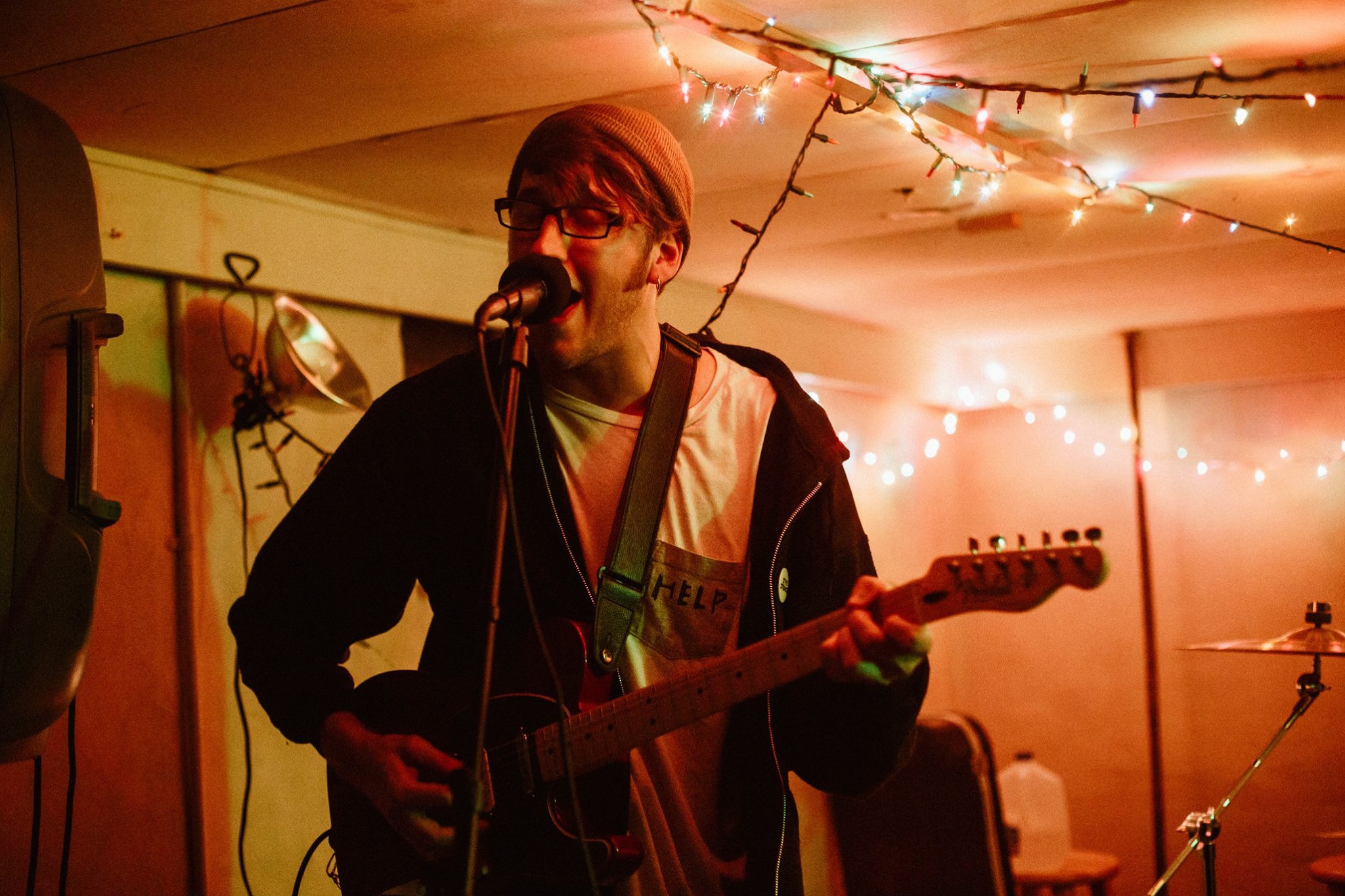 buzz: So, how about that name?

MH: Chase is actually a kitten hypnotist, and I work on the side as a sourdough bread-maker.

ME: He comes from the Dutch-land.

MH: (laughs) No, we were just roaming around Chase’s hometown one day, and there were signs everywhere for free kittens and bread. What a combo, right?

CS: Literally. There were these huge, painted-on plywood signs all over town.

MH: And they led back to this family with, like, tables full of bread. Just loaves and loaves of bread, and a box of kittens they were giving away.

CS: And this place was Podunk. Spitting in a chamber-pot type place.

buzz: You have to wonder how you find yourself in that situation, with so much of both that you have to give them away for free.

CS: Maybe the family had a bakery, and the kittens were from the farm.

MH: Or their bakery had a kitten infestation.

CS: So they were like, “well, we could either make some kitten sandwiches… or we could just give them away” (laughs)

ME: So, everyone leaves a Free Kittens and Bread show disappointed.

buzz: Speaking of, Marcos said beforehand there’s been some pretty fun shows, other than that. Any stories?

MH: Well, yeah, actually. There’s been a lot of amputations this tour (laughs). So at the New Orleans show, a guy in one of the bands had his foot amputated the day of the show because of some construction accident.

CS: And just last night, the guy we were staying with, one of his friends was working on a studio in the house, and accidentally cut off his finger. There’s been a bunch of kinda shitty stuff this tour.

ME: It’s the Morbid Winter Tour. We’re just bringing good luck to all the locals.

BE: St. Louis was good for us. Nothing morbid. Except for Marcos, he got haunted.

ME: I don’t really want to go into detail about, but I freaked out. I’ll go into some detail. So, disclaimer, I did not take anything before this. At least not that I know of. So it was after this house show, and everyone else was asleep upstairs and I was grabbing my water from downstairs. And this place was pretty creepy as is, there were like these red Satanic looking lights, and I started hearing some footsteps in the room with me, and then some banging on the ceiling and stuff. And then, just to top it off, their housecat comes up to me, and I’m trying to just pet it, and it starts freaking out at me and following me around. It was really weird, it really freaked me out man. And worst of all, I never even got my water.

buzz: It must have been the band name that pissed him off. He knew you guys were lying.

Check out the music of Free Kittens & Bread here.