“We walked in ten years ago and said ‘We’re changing that tomorrow,’” he told me after an unfortunate head-to-lamp collision. “We still haven’t gotten around to it.”

I ran into it after his wife, Justine, brought out a mouse she trapped in a cup, and we watched Seth release it on the lawn. Inside, his youngest son bounced in a cradle. The traces of fatherhood were everywhere. There’s no denying it: he is a dad.

Fein is also the founder of Smile Politely, founder and producer of the Pygmalion Festival, and, for the last year or so, the owner and proprietor of The Accord. In other words, he’s a C-U music mainstay.

But, Fein will be sure to tell you, he is first and foremost a dad, which is the reason he’s stepping down from The Accord. 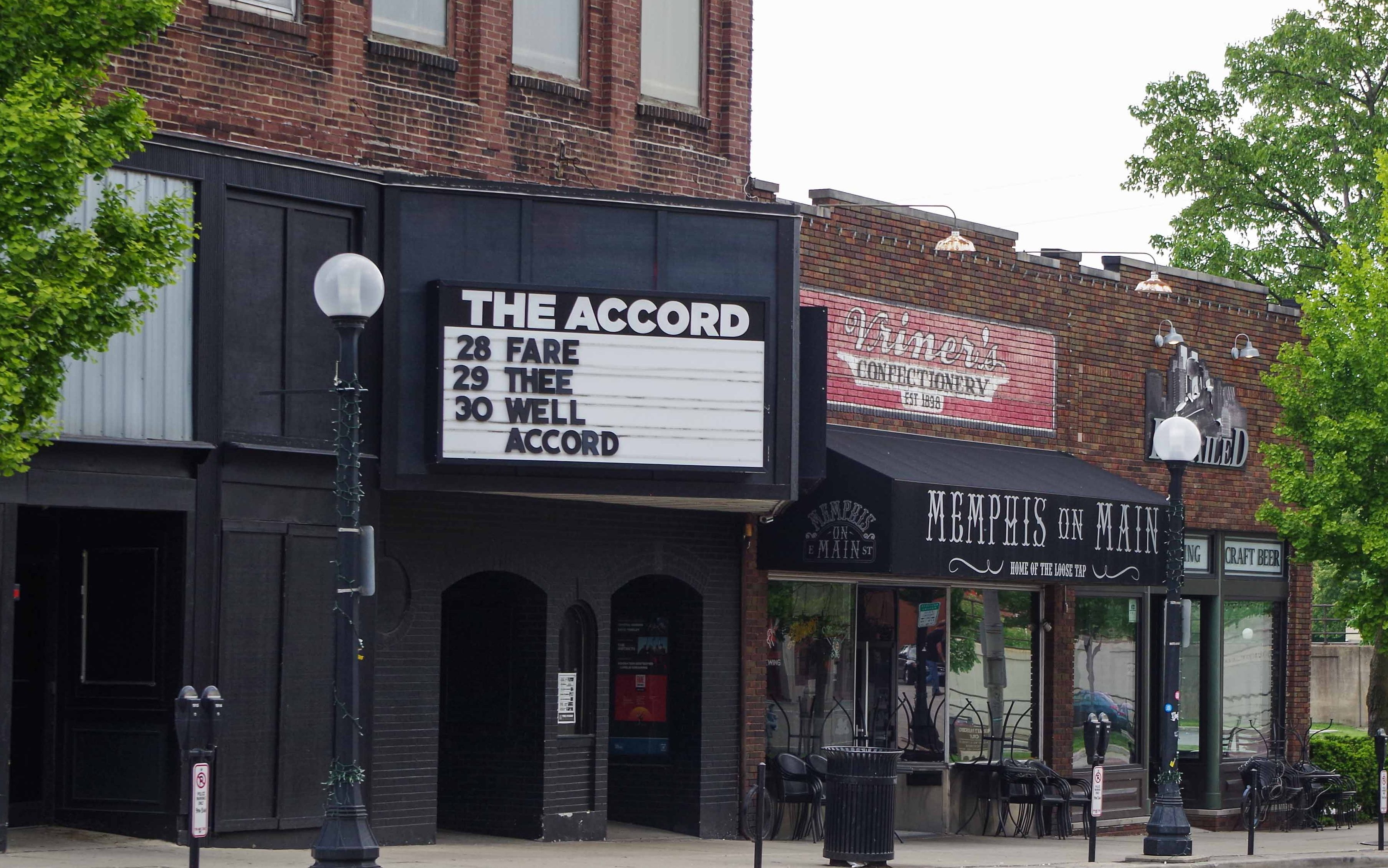 Outside The Accord and on Main St. in downtown Champaign on May 10. The lineup featured on the sign is from the closing week of shows The Accord held. Photo by Jessica Jutzi.

“When Justine got pregnant for the second time, I kinda saw the writing on the wall,” Fein said. “One child is one thing, but two is a whole other thing. I just want to spend more time with them and Justine.”

The Accord, formerly known as High Dive, soon to be known as 51 Main, and locally known as one of the best live venues in the area, closed at the end of April.

It was a short-lived incarnation, existing for just around a year under Fein’s ownership. But he always knew that there was a possibility it wouldn’t last long.

“I’ve been putting on shows for 15 years, so I wanted to give it a shot. Mostly because I don’t like to look back on life and say, ‘Why the hell didn’t I do that?’”

But now the excitement seems to have waned.

Fein says he feels that he’s no longer the right candidate to run the place.

“I’ve aged out of my demographic. I’ve got gray in my beard and baby poop under my fingernails,” Fein said. “I’ve started thinking about how I want to spend my time.”

It goes beyond fatherhood, though. 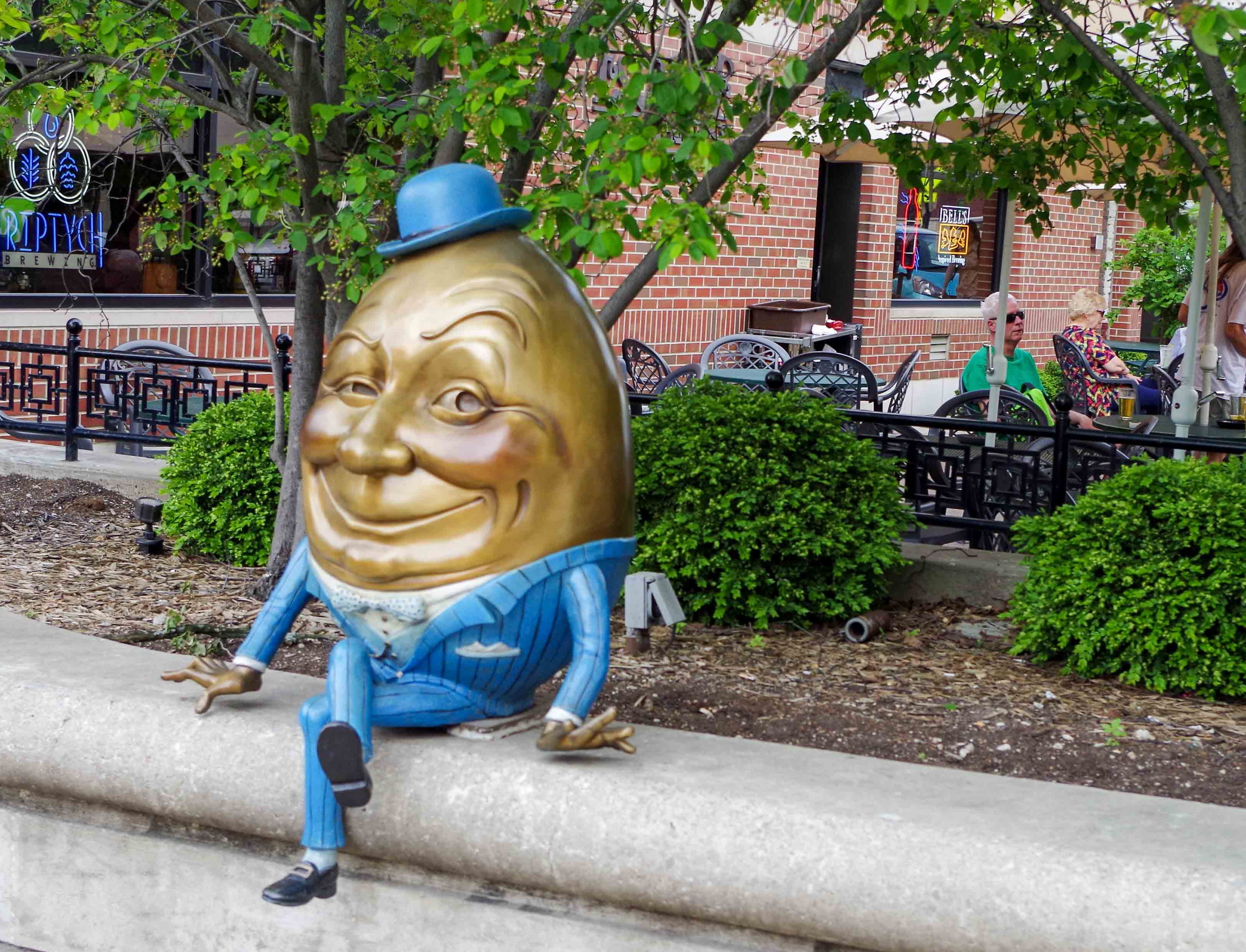 A sculpture sits outside Esquire Lounge Inc on Walnut St in downtown Champaign. Notes of character and culture are tucked in with the college town that comprises the CU community. Photo by Jessica Jutzi.

For Fein, music is a youth movement at its heart. A venue like The Accord should be a tastemaker, according to him, a place that finds the weird and the new and gives them a stage.

“And it’s not just music — a place like that should have theater, comedy, dance parties. Everything,” Fein said. “I just can’t devote my life to that anymore. I can’t know everything.”

“Doing a festival where I can hone in on what I think the community will like is different than the week-in, week-out booking and programming at the Accord,” Fein said. Pygmalion affords him the opportunity to think on a bigger scale.

And his plans attest to that: Fein says this year’s Pygmalion will be a much more concentrated affair, with events being focused around one central location, and more restaurants and artisans contributing to food and craft tents.

Fein says he plans on premiering a hack-a-thon event, as well. He talks excitedly of new artists, ones that a college campus would be thrilled to have.

Fein brings in outside knowledge — he credits his VP, Patrick Singer, with helping him keep an ear to the pulse and tipping him off to new acts. Seth Fein thinks big, and it seems like he never stops thinking.

That’s the strange part — for a guy who says he can’t know everything, Fein sure seems to.

Talking to him, you can feel the passion and knowledge he has not just about music, but about community, and how those two intertwine. Fein cares about the place where he lives.

It’s that sense of communal responsibility that gave Fein another reason to step down from The Accord.

“Curation is the name of the game,” Fein said. “I wish America put more emphasis on curation as a concept, because it’s vital to making something special. And I’m not just talking about a venue or a festival. You need to curate the city you live in.”

With The Accord, Fein said he had a chance to curate his own place. But his focus on larger, wider-reaching projects seems to show that he has his sights set on a broader sort of curation — the kind that can shape a town and the people that live in it. 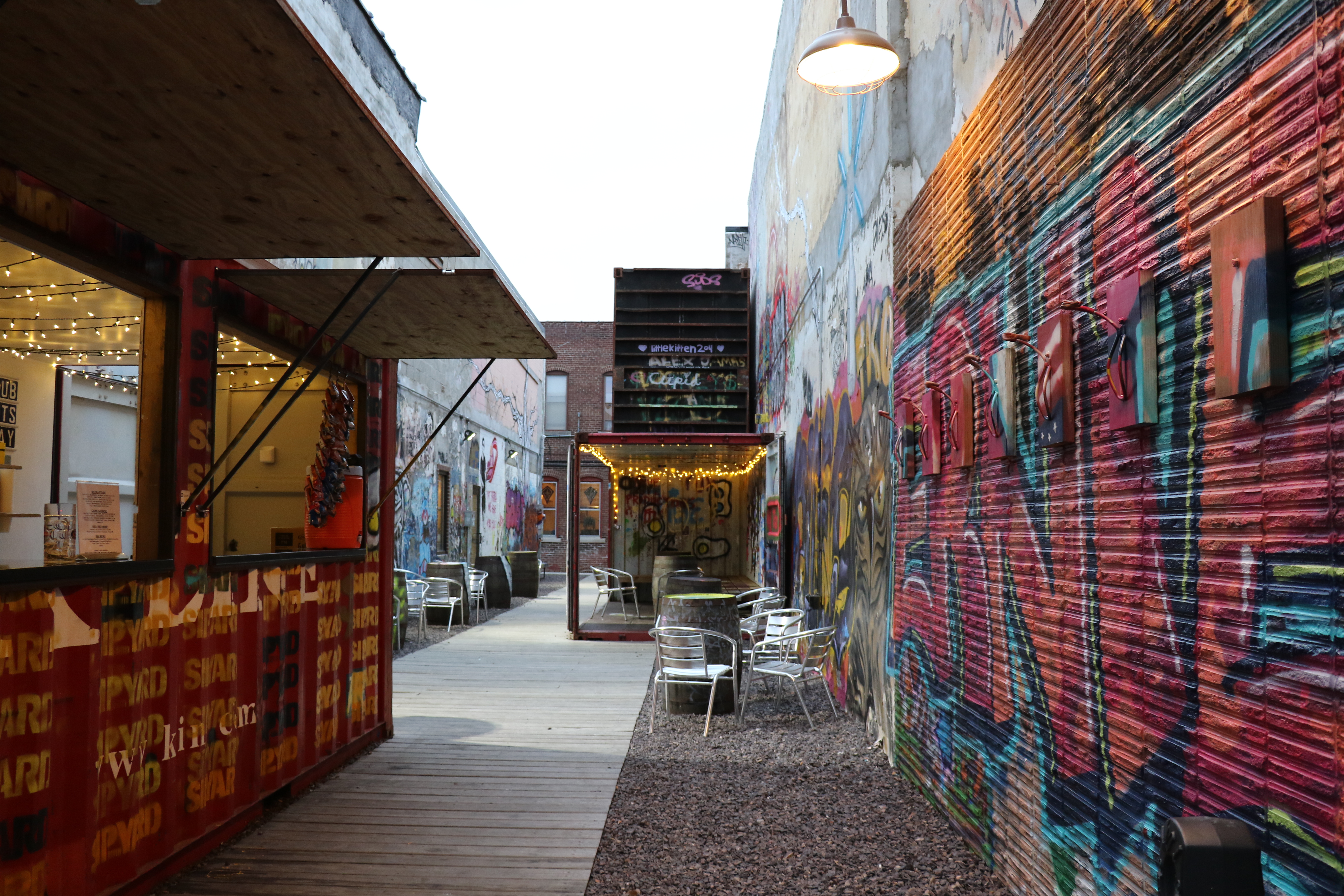 This alleyway covered with graffiti is known as Sipyard, an outdoor music venue in downtown Urbana. Photo by Brian Bauer.

Fein says mindfulness is vital.  A great city doesn’t come together by accident. In Champaign especially, there’s a strong lineage of music and the arts for the town to build off of — from the Polyvinyl record label, to the Boneyard Arts festival, to the legendary live venues that used to blanket the area, there is a heritage of excitement and energy of the sort of DIY ethic that makes live shows here so exhilarating.

But it seems that the cultural heritage of Champaign is slowly being replaced. “If you look at downtown Champaign now, it’s all bars and restaurants,” Fein said. At least in Champaign, places like The Accord seem to be a dying breed.

“Downtown Champaign used to be the place where all the musicians hung out and worked and lived,” Fein said. He recalls going to dollar pint night at High Dive in 1999 and watching all the hipsters ogle one another.

“It was perfect,” Fein said. “And then that slowly went away.”

When legendary local venue Mike and Molly’s closed last year, it seemed to herald a death knell of a particular cultural moment in Champaign, a moment where the city had the avenues for artistic expression readily available for anyone.

So maybe that’s part of the reason for the renewed focus on these bigger projects. The venues may be disappearing, but there can still be a platform for those artists who are still creating.

The festival and the magazine are a way to give those creators a platform, a place they can grow from. It’s the act of curation, writ large.

Shaping the city in this way, making the arts more available and relevant all makes sense for Seth. Not just because he runs Pygmalion and Smile Politely, either, but because he’s a dad.

“I don’t think we as a community put nearly enough money into the arts and cultural education as we should,” Fein said. “Art, music and theater all develop cognitive ability in our kids. Speech, language, math, music — they’re all tied together.”

With a national policy that seems to be hell-bent on cutting any and all funding for cultural engagement, it’s more important than ever to be involved at a local level, according to Fein, to make these resources available for the next generation.

Fein, a self-described outspoken liberal, is adamant about the role of the arts in a community.

“If you told me that I was gonna get taxed, and that it would go to fund education programs and cultural outreach events, I’d say fuckin’ sign me up. These are the things that keep people coming back. Maybe if we funded these things people wouldn’t leave the first chance they get.” 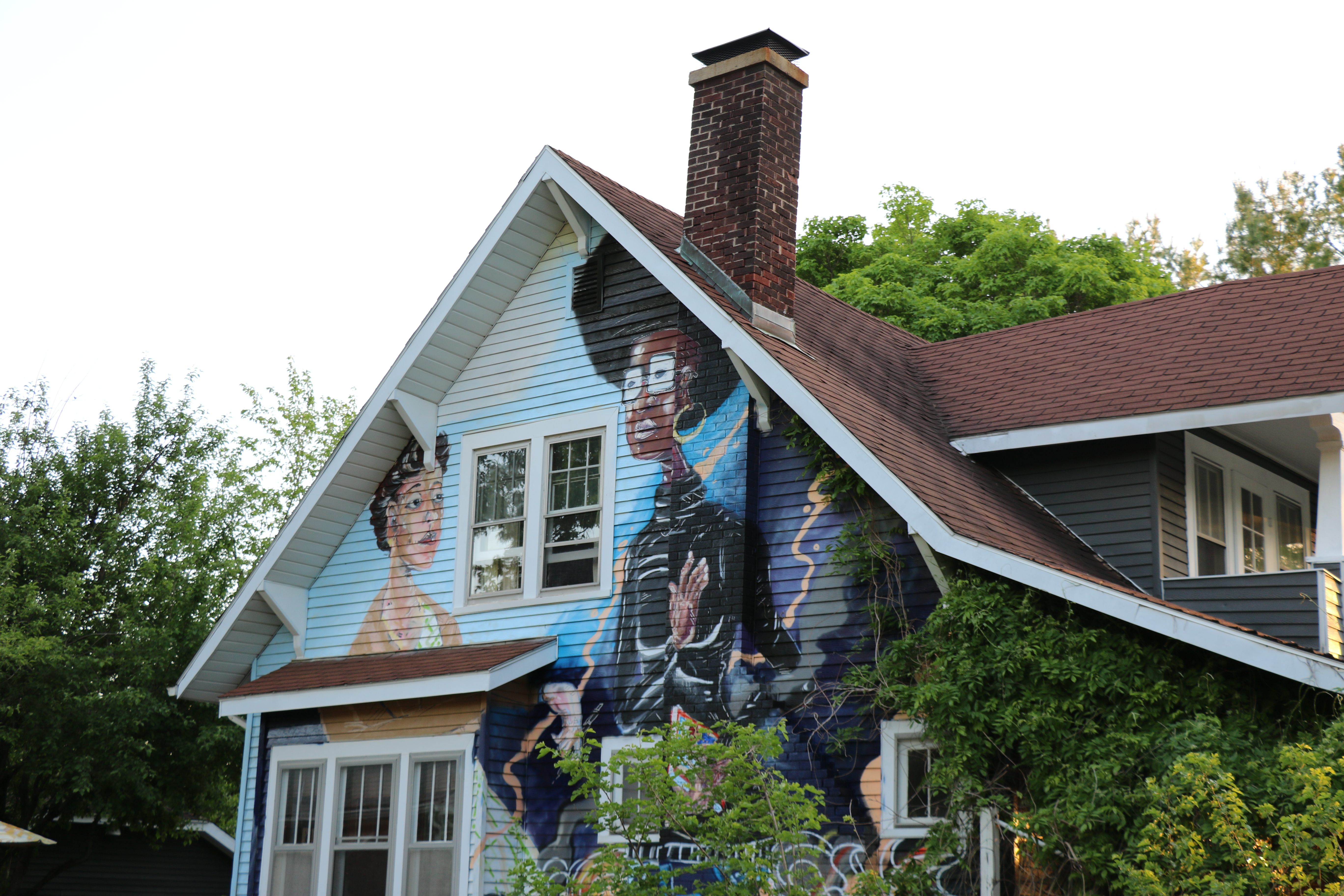 Fein lives in a home that illustrates the type of community he is working towards cultivating. One of creative and racial diversity and harmony. Photo by Brian Bauer.

Keenly aware of his own biases, Fein went on to expand on his knowledge of the other side’s policies.

Fein has studied up on true conservative theories concerning taxation and civilian responsibility. The thing is, in a lot of ways it resembles his own ethic.

“True conservatism, it resembles the ethic that Emerson and Thoreau had, that your life is yours to create. But the emphasis is on creation, not preventing change. You’ve always got to be open to change,” Fein said.

So, while the Champaign he knew may be disappearing, Fein is optimistic about the future of the city. Like everything else in life, Fein says change comes in cycles.

“I grew up in Urbana, been here my whole life,” Fein said.

“There was a long period of time when Urbana didn’t have shit. Crane Alley, the Iron Post and that was it. But if you look at it now, it’s nearly unrecognizable. There’s people doing some great stuff there: C4A, Sipyard, the IMC. There’s all these great cultural spaces, and they exist because people care, and they try,” Fein said.

In Champaign, you can still see that musical heritage, if you know where to look. The thriving house show scene, the Art Theater , the huge range of festivals hosted in the area. These are all expressions of an artistic spirit that Champaign-Urbana just can’t help but attract. 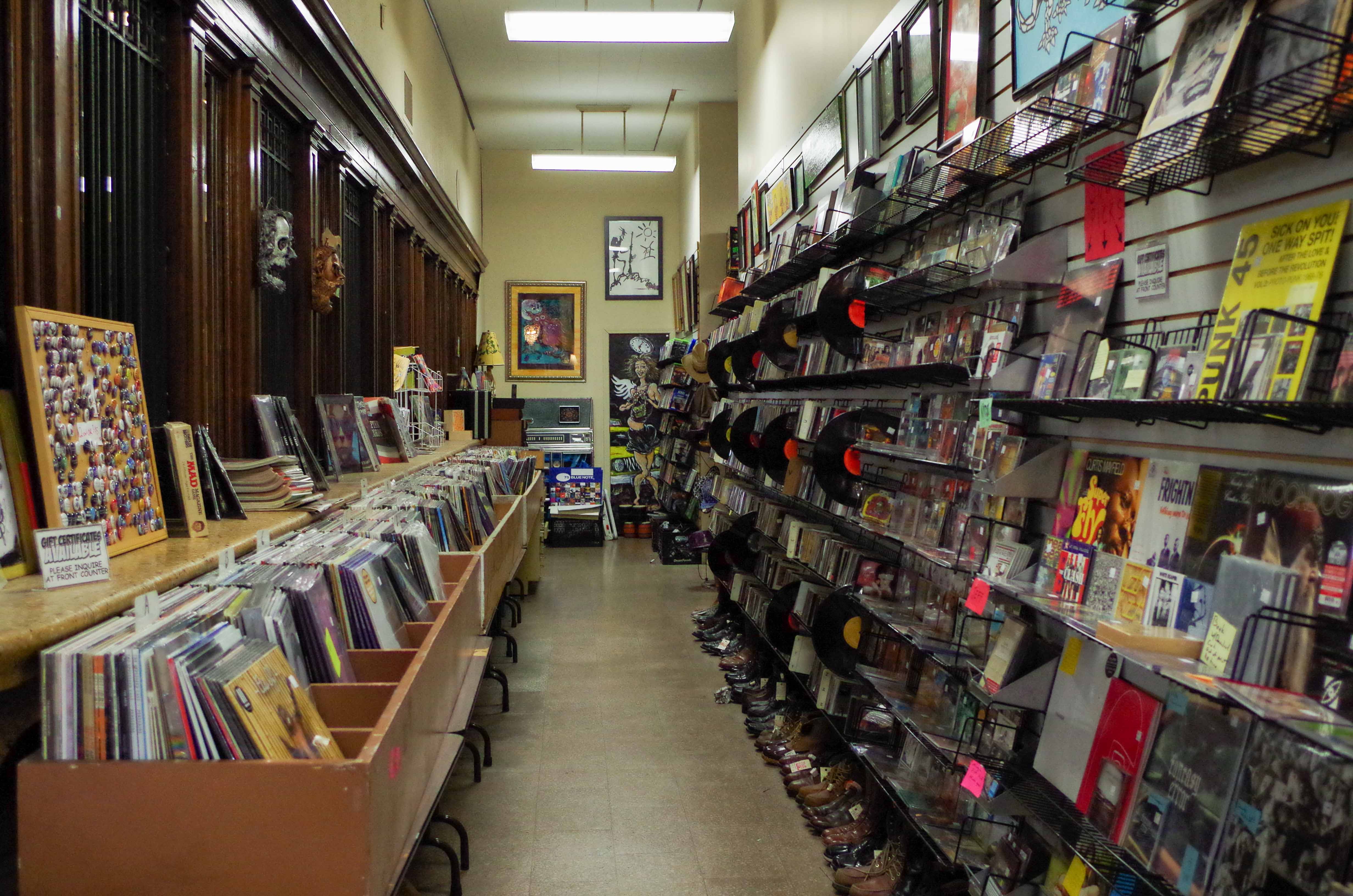 So while The Accord may be gone, others like it will come, whether tomorrow or ten years down the line. Champaign-Urbana will continue to be a bastion for the artists and the thinkers, the creators and the misfits .

Fein hopes this will include a community where more UIUC students feel at home.

“You don’t have to go to a big city and live that life,” Fein said. “I know that’s what everyone does, but you can stay, and carve out a life for yourself somewhere where your voice matters.”

It’s good advice, no matter where you end up. No one is an island.

You are a part of the place you live and getting older doesn’t make that any less true.

Go to those freaky basement shows you’ve been thinking about, see that weird art gallery you’ve been hearing about.

Take part in your city, and if you don’t like it, you can change it for the better, even if you’ve got gray in your hair and baby poop under your fingernails.

Change isn’t something to be afraid of, according to Seth Fein.

The world keeps turning, and with it, this little city out in the cornfields will not remain dormant.

With people like Seth Fein, and all the others who create here, people who care, people who try, CU will continue to be a great place to live in and learn from, no matter how it evolves.