The only time I have ever been to Pygmalion was about a year ago. The University of Illinois can get a rep for being “just another party school” or a too big University “only surrounded by corn,” but the Pygmalion festival puts these rumors to bed.

Sure, our campus is large. And yes, if you’re facing the right way in FAR you can see corn and corn, and more corn. But, isn’t it the little things that make a University great? The ones that not everybody knows or cares about?

Well, Pygmalion, tucked into an open lot in downtown Champaign is not the number one thing people think of when they hear “the University of Illinois,” but to locals and community members who like things that are fun, affordable and outdoors…this is about as good as it gets.

And while Pygmalion might not be the best known festival in Illinois, for being the primary one to bless the grounds of Champaign-Urbana, I would say it is doing an excellent job expanding. Look, No Name and Julien Baker blessed the community last year, and they’re coming back.

The World Is… band, Sales, Thundercat and Animal Collective aren’t necessarily big, but most certainly aren’t small either. And they are coming to our concrete backyard! The cornfields did not scare them away! I can barely believe it.

In addition to these bigger artists, local groups like Ratboys, Marathon and Crofton Coleman & The Amber Sky. This is the part of the fest where we get to watch past graduates or current students stand onstage and play songs they created, doing what they love.

Community became a tangible thing for me when I attended Pygmalion, where I recognized faces in the medium sized crowd and onstage, where I heard bigger name artists call out to “Champaign,” and acknowledge us as an actual city.

It is easy to say that I am thoroughly please with this year’s lineup, the only question I have is where is Mother Nature? The CU-born hip-hop duo graced the Pyg stage at last year’s fest, spewing love, peace and good vibes over the audience. Now, primarily located in Chicago and actively growing their #MVMNT, I’m curious as to if they had a conflict with this year’s fest or just weren’t called to join the lineup.

Whatever the situation, the duo will be deeply missed. However, don’t let that dissuade you from checking out their music here. And most certainly do not let that stop you from buying your ticket to the Pygmalion festival and checking out a side of Champaign-Urbana you may not have even realized exists.

This year I’m not really excited about the music at pygmalion.That’s not to say I’m not looking forward to it, but I have to admit that I haven’t listened to any of the acts other than BadBadNotGood and the appearances of Thundercat and Animal Collective’s Panda Bear in other artists’ work.

And from what I do know of from this year’s music lineup there isn’t anything I see myself going crazy to, which is what I most enjoy about live shows. But I’m ready to chill out and hopefully discover some new music.

However I am very excited for George Saunders. His short story collection “The Tenth of December” caught my attention when it received widespread acclaim, and appearances on Stephen Colbert and Seth Meyers recently settled my impression of him as one of today’s important literary figures.

In his interviews he comes across as an intelligent and uncommonly kind person. One would expect him to be pretty smart given he’s a MacArthur Genius Grant recipient. He seems to have a lot to say that is both insightful and positive, so I look forward to reading his recently published novel “Lincoln in the Bardo” and hearing him speak.

I looked up some of the other authors and have added works by Anthony Marra and Alissa Nutting to my reading list before Pygmalion. Marra’s books “A Constellation of Vital Phenomena” and “The Tsar of Love and Techno” especially caught my eye because I love all things History and feel particularly uninformed, and as a result interested, on Russian History, which is a major theme in both.

What I’m most interested in for Pygmalion is Julien Baker. I literally only heard about her through this festival lineup. It seems like she has a very stripped back approach to music and songwriting, yet it still manages to be unique and powerful. She’s also only 21 years old, which makes things even more impressive. Curious to know if she has any thoughts about dropping out of college and whether or not she regrets that decision.

Of course I’m also excited to see Thundercat in the lineup. I’ve only started listening to his music recently, and while I’m not the biggest fan, he definitely has a nice sense of humor and charm that will hopefully lend itself to a good live performance.

An English word I recently learned is ‘eunuch’, which was a sad one to learn as it taught me that there were also men outside the ancient Korea who were castrated for political means. Among many unobtrusive new English words that I learned and soon forgot throughout the vacation, the word ‘eunuch’ was able to survive in my brain.

This was partly due to the Korean usage of ‘eunuch’, which is slightly more interesting as it extends to a person who is terribly bad at or ignorant of something (i.e. “expression-eunuch” which refers to a brusque person who finds it hard to express love feelings towards his or her partner). However, it was more mainly due to my memory of the Pygmalion Festival last year.

In 2016, the year I was disoriented by Illinois’ strange surroundings, I was told that there would be a decent festival where many artists would perform. Looking at the sheer amount of artists that I was not familiar with in the lineup made me realize I know nothing about music.

I also realized that I was incapable of enjoying music to the fullest when I did not exactly know what to do with my body along a band’s performance (should I sway, tap my feet, or just bob my head?). Although I was able to do some awkward, robotic dancing in the end, I couldn’t deny that I was a “music-eunuch”.

Since the last Pygmalion Festival, I listened to more music and watched more performances in order to become less of a “music-eunuch”. I am still on the very eunuch side in terms of music though, but I improved. As a result, there are slightly more artists that I recognize in the 2017 lineup.

Among them, Julien Baker and Noname are the ones I am looking forward to seeing again. Seeing Animal Collective in the flesh is also very surreal too. Etherphonic Theremin Orchestra is a surprising one to notice in the lineup, which testifies that the Pygmalion Festival is growing in its musical scope.

Hopefully in this festival, I learn more about new artists, dance more casually with the music, and become a “music-macho”.

For me, Pygmalion has always ostensibly seemed to be super highbrow indie and not very accessible for my listening perview. The past two years I would see the line up and be intimidated by the numerous names I did not know and cling to the three or so I could say I solidly knew who they were and had heard before.

Generally speaking, that “three” is really one, maybe two bands I actively listen to.

This year, that one band I truly listen to is Charly Bliss. I discovered them via NPR’s playlist that is curated by people who organize Tiny Desk concerts. When I first heard them, I was taken aback by the high pitched voice of the lead singer. It was almost annyoing, but somehow it worked to create this edgier sound to their almost saccharine pop sound.

Nonetheless, I am excited to see them in person.

In terms of the line up as a whole, I am looking forward to expanding my horizons, rather than rashly keeping my head in the sand. Pygmalion is an opportunity, even if you don’t attend, to learn more about Champaign’s amazing local music scene as well as these lesser known big names you see farther down the bill.

Pygmalion’s whole purpose is to bring knowledge to our community through music, literature, and technology. Take advantage in some capacity. Listen to the artists online and find out more about what an amazing opportunity we have each year to listen to these artists.

The Pygmalion Festival is right around the corner! Ever since the lineup dropped, I’ve been trying to listen to every artist featured and introduce these wonderful artists to people I know. Personally, I was incredibly excited to see the Animal Collective (I need to hear “Kinda Bonkers” live) and NoName (You have to love talent from your city) featured on the lineup. I highly recommend checking out Now, Now and Big Thief! They’re very mellow groups with a distinct sound, and I look forward to seeing them play at Pygmalion in the fall!

This year’s Pygmalion Festival lineup is solid from all vantage points. While it would be easy to snag an interesting headliner, like Animal Collective, this year’s line manages to  have a foundation of smaller acts that outshine the main bill.

Not to disparage Animal Collective, which will be a fun set even if their brand of electronica isn’t your type, but when placed with acts like Noname, Julien Baker, Smino, Palehound, and the myriad of CU bands that are fantastic in their own right, its hard not to compare.

As a person who loves festivals as an opportunity to discover new music by way of new, up-and-coming bands, Pygmalion did not disappoint with the large array of acts to choose from. There’s something for everyone, and if not, there’s something to discover for everyone. Pygmalion did a great job of beefing up their smaller acts this year, which will make the lead up to main billing even better. 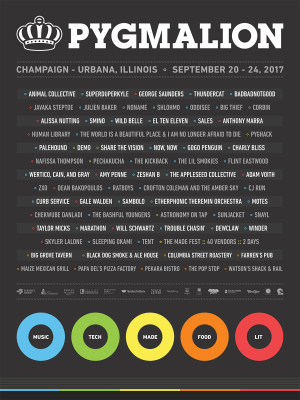