Rota is an up and coming artist out of Champaign, IL. Recently, he has dropped his newest album “nEuROTICA” and it was mostly produced by “Lucca”. Within the information for his new album he explained his goal; “to make a frenetic, mish-mash of songs that somehow cohered, to explore both the personal and political sides of neurosis and depression, in all their creative glory and agonizing difficulty, and, most importantly, to put out a truly original piece of work. 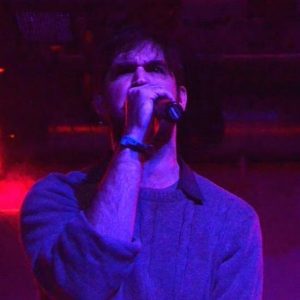 “Rota is a rapper, lawyer, spoken word poet, and the tallest Jew for miles. He is part of The Nocturnals along with Lucca and part of the Rogue Tendency collective out of Champaign, IL.”

Other producers on the album besides for Lucca include, The Letter L and Humply G. The recording of the majority of the songs was at Shadelite Studios in Champaign, IL, and it was released by Rogue Tendency Entertainment.

“nEuROTICA” is a very diverse album overall. It includes a blues song, a waltz-rap type song and a stoner anthem. So far, the stoner anthem “Marijuana & Netflix” has been getting increasingly popular since the debut.

Recently, the song has just passed 900 listens on SoundCloud as well as 20 likes and 8 reposts. The song has a feature from Chase Baby and was produced from Lucca. The beat of the song starts off as an old hip-hop, Dr. Dre style beat and eventually fades into its chorus.

The song has a French horn also played by Jancie Philippus and a percussion played by Ross Robinson. The producer for this song was The Letter L. Just as “Marijuana & Netflix” has been recently, “Drink To Forgetting” has been getting increasingly popular since the debut; with over 250 listens, 11 likes and 1 repost on Soundcloud.

The first song off of “nEuROTICA” is a track called “Train in the Distance” produced by Lucca. In the song, Rota talks about how “everybody loves the sound of a train in the distance.” Personally, I’m not so sure as to what this means but I would love to find out. The production of the song has a strange 808 as well as a simple clap and snare. Later on in the songs comes along some high pitched keys from the piano.

The second song off of the album is called “Insomnia”, and it was produced by The Letter L. The majority of college students can relate to the song with the terrible sleeping habits they have encountered over the years. “In an hour its two, in another hour its three, I’m wide awake eating midnight snacks and watching tv.”

Insomnia is the worst and this track puts its perfectly. When it kicks in, there really isn’t much to do but eat and watch tv! Next time you seem to have insomnia, Rota encourages you to contact him as he said “if you can’t sleep holler at me” in this track.

The third song is called “Weapons” and was produced by Lucca. The track has a simple drum and snare beat to it that really allows the listener to catch on with the beat. Within the lyrics of “Weapons” are several phrases that seem as if everything in the world is a weapon.

Overall, the album is very diverse and includes a lot of content for a lot of different people interested in listening. I’m sure everyone should be able to find some song on the album they will enjoy. You can find the album on SoundCloud, bandcamp, and also Spotify.

If you are interested in supporting these local artists, Rota has his album release show on July 22nd as part of the Champaign Cypher Series at The Canopy Club in Urbana. Other artists in the show will include, Chase Baby, Truth aka Trouble, Rogue Tendency, OG Temple, Forrest Bump, Moe Pesci, M.A.G., and 94 Cove. Tickets are only available at the door for $8, must be 18+ to enter and the doors open at 9PM.