“American Dumpster”, the latest alternative rock album released by the band Jesse W. Johnson & Coyote Scream. Jesse (lead singer) is a songwriter out of Chicago and graduated from the University of Illinois in 2008. After listening to the album, the meaning of the title still remains a mystery that only Jesse and his team probably knows.

Throughout the album, Jesse does the majority of vocals, guitar and the harmonica. Also included is Yoo Soo Kim with the viola, bass, synth and vocals as well as Zach Benkowski with the drums and vocals. Paul Doerr does the bass on the tracks “American Dumpster”, “Stand to Smile”, “Hangover Heaven”, “Kid in the Castle” and “The Miles In Your Eyes”.

The entire album was recorded and mixed by Yoo Soo Kim at Old Fire Studios out of North Chicago. The album was released on July 2nd of 2017 and continues to become increasingly more popular as time goes on.

Throughout the album, Johnson tells a story that allows the listener to relate to him and his band through several real-life scenarios. Included in “American Dumpster” is a total of 10 songs for you to enjoy.

The album starts off with a track called “American Dumpster”, which is the most popular song so far. The song has a classic rock with a mix of country within it. Included in the song is a bassline that is played by Paul Doerr; the bass is catchy and allows the listener to easily follow along.

The second song is titled “Stand to Smile” and has a catchy harmonica to go along with the drums and guitar. It seems as if Johnson is trying to reach out to a loved one as he sings about how he will be there for them throughout the song.

The third song is titled “Hangover Heaven”. The song seems to have the same rhythm as “American Dumpster”; it has a sense of rock with a combination of country, in this track, country seems to be the more dominant style. It has an amazing violin as well as a harmonica. The meaning of the song for me was a break up being compared to a hangover. You want it to be over so bad, but no matter what you do, it only takes time.

Next on the list is the fourth song, titled “Hate It Here”. The song starts off with a great guitar melody, leading up to the drums and other instruments included. Johnson also explains with his lyrics as to how he tried to study to be a good man for those around him, but unfortunately, it didn’t work out; this explains the title. Followed in his lyrics is how he chooses to live his life year by year to ease the pain of not wanting to be around those he has to be by.

Track 5 on the album is “Kid in the Castle”. Throughout the beginning is a guitar followed by a harmonica. The simplicity of this song really makes you appreciate it more than most of the songs. Within the lyrics of the song is a quote that is quite that is pretty touching, “I’m a pen with no ink, I’m a car with no gas, I’m a rider with no will.” Obviously, these lyrics are dark but can be touching to most who feel that they are no use to the world. Also included are several comparisons just like these lyrics sang. 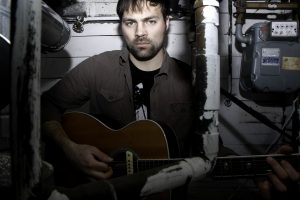 The sixth song has more of a heavy rock vibe and has more darkness to it than most, hence the title, “Beautiful Darkness”. The lyrics seem to be with a love hate relationship that Johnson may have experienced in the past. Reason being, Johnson was singing “take this love I have to offer, love that I’ve had locked inside my heart”. Also in the song are extremely impressive guitar melodies.

Next up is a complete change from the dark song prior to it on the list of the album. The seventh song is slow and more calming, it is titled “Night Begins to Fade”. Johnson sings about needing help from someone and willing to return the favor when they may need help as well. Something we could all probably relate to. We need our friends/loved ones to help us get out of a sad funk.

Included in the album are three more songs you should check out, 8 – “No Mountain”, 9 – “The Miles In Your Eyes” and 10 – “Through the Light of the Stars”. Thus album is available for free on SoundCloud and bandcamp. Also check out their new music video for American Dumpster on YouTube!

If you are interested, Jesse W. Johnson & The Coyote Scream are going on tour this summer and they are playing on Friday 07/21 at Cowboy Monkey in Champaign at 9pm. You must be 21+ to enter, tickets are $7 at the door. For more information about the show, check out the Cowboy Monkey on Facebook.