Hey, its Elani, a former buzz Editor. I'm a fan of movies, music, and memes, and enjoy writing about all three. ekaufmn2@readbuzz.com

The Pitchfork Music Festival lineup this year is looking good so far. I say “so far” because the notoriously high-brow media company is spreading its lineup announcement out over three weeks, to the ire of almost everyone involved.

Using the same announcement tactic as last year, Pitchfork has been live streaming a woman painting the artists onto a mural in Wicker Park Chicago. So if you want to be the first to know who’s playing the festival, you literally have to watch paint dry.

This is beyond obnoxious. Last year, the mural-paint thing was only for the headliners. Now, it’s for the entire lineup over three weeks. What PR person at Pitchfork Media was like, “Wow! Everyone hated this thing we did last year, so let’s do it again but longer”? The people have spoken, and they want instant gratification.

As of this week, there are still 14 artists to announce, and two of those are headliners. In the meantime, the lineup so far is nothing to sneer at. Pitchfork is known for its well-curated fests, and the limited number of acts makes sure to maintain a level of quality control other fests can’t compete with.

Tame Impala, Julien Baker, Courtney Barnett and Earl Sweatshirt have all been confirmed, and that’s just on Friday. As of right now, the lineup is boasting a fairly well-balanced mix of artists young and old, rock and rap, male and female.

One thing I love about Pitchfork as a festival is the diversity of the acts relative to most other festivals out there. Last year’s Saturday lineup was almost a tribute to powerful female stories, and this year it looks like the girl power is going to be spread throughout the whole weekend.

Along with voices from the LGBTQ community and people of color, Pitchfork (for the most part) embraces less conventional acts, and for the better.

I’m interested to see who will pop up in the final list of names next Tuesday. It’ll be hard to top artists like A Tribe Called Quest and Solange for the two headliners they’ll be announcing, but somehow, I think Pitchfork will manage to do just that. 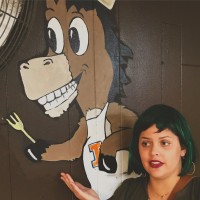 Hey, it’s Jess! I was the editor of buzz from 2017-2018. Now that I'm retired I still like to write something for my favorite on-campus magazine every now and again. In my free time, I like to think about sandwiches, be around as many mountains as possible and cheer on the surf music revival (it's bound to be here any day now). "Catch a wave and you're sitting on top of the world!" @hey_itsJ3SS

Okay, so Elani put things quite frankly. Pitchfork, the publication, is doing absolutely everything in its power to draw out the process of announcing the artists on the lineup for Pitchfork, the Chicago music festival.

Let’s be real though, everyone secretly lives for, drama and things are definitely getting tense. The painted renderings of who will be performing and the weeklong delay is keeping potential ticket-buyers on the edge of their seats, but also susceptible to rumors of any kind.

I’ve never really been a quick ticket-buyer when it comes to festivals. Typically, I’ll play the whole waiting game and see which friend can twist my arm to spend a certain amount of dollars on a concert in the month or so before the event before I finally buy a ticket.

Pitchfork announced Julien Baker last Tuesday and they had me right where they wanted me: in the Eventbrite checkout section at the end of February with a Friday one-day ticket to my name.

Now the stars must have just aligned for me because the same time this Tuesday as last week, Courtney Barnett’s name sidled up next to Julien’s on the lineup and my hasty purchase was not only once, but twice validated. So yes, you could say I’m doing just fine with the rate they’re going about the announcements, but catch me next week filled with existential dread when I realize I should’ve gone with a three-day pass instead.

I can’t tell if there will be instant regret or not at this point, but then again that’s the magic of music festivals, isn’t it.