As a change of pace this week, and in honor of my first two film teachers, I plan to examine two short films that they taught me a deep appreciation for.  Besides teaching the classics by Alfred Hitchcock, Orson Welles and other giants of the silver screen, we looked at some of the original masters of silent comedy. The first silent film gem is Charlie Chaplin’s “The Rink” (1916) and the other is the Buster Keaton/Eddie Cline’s “Cops” (1922). “The Rink” was taught to me by my very first film teacher, Mr. Seymour Janowitz, for his course called “Film as Art” in my senior year of high school and “Cops,” taught by English Department teaching assistant, Mr. Robert Johnson, in my English 104 Introduction to film class at the University.

“The Rink” was made at the height of Chaplin’s silent period working for Mutual Studios, before he, Mary Pickford, Douglas Fairbanks and D.W. Griffith decided to create their own studio United Artists, a production/distribution company controlled by the creative artists in 1919. In this film, Chaplin plays a busy waiter, who during his lunch break does some incredible stunts on skates in a nearby roller rink, while further trying to impress a cute local woman (Edna Purviance). As director, Chaplin utilizes several situations, like the restaurant’s swinging in-and-out kitchen door to great comedic effects. On the rink, his smooth graceful skating outwits the villainous Mr. Stout (Eric Campbell) who repeatedly stumbles and falls.

“Cops” (1922) is a remarkably simple tale of a man trying to prove his worth to a woman he loves, but who tells him, “I won’t marry you until you become a big businessman.” Shortly thereafter he stumbles on a wealthy guy’s wallet who is about to enter a taxi. Confusions ensue and he winds up with all the man’s money. Soon thereafter, he is quickly conned into buying a load of furniture. From there he carts that load off in a horse-drawn wagon through busy city streets, unsetting an annual policeman’s parade. Finally, after an outrageous chase with hundreds of pursuing policemen, Keaton’s character finally escapes—only to be rejected once more by his sweetheart.

We learned silent films were never shown completely without sounds.  While most utilized occasional title cards to locate settings and name characters, and there would also be an occasional bit of written dialogue or spoken words displayed, silent films were almost always shown with a piano or organ accompaniment, at times even an orchestra. I once witnessed an incredible Chicago screening of Abel Gance’s 1927 silent epic “Napoleon” with Carmine Coppola (Francis’ father) conducting a complete orchestra with his newly composed score for the film.

Key distinctions were made by both teachers about the typical Chaplin and Keaton characters that applied to both films.  Both were little guys up against great odds, who were very physically skilled and athletic. Chaplin was frequently melodramatic and sentimental and created comedy out of tragedy; his “little tramp” had the distinct bowler hat, baggy pants, a too small jacket and a distinct walking cane; his mustached face could always crack a smile.  By contrast, Keaton was more ironic, sarcastic and cynical.  He was known as the stoic “Great Stone Face”. His distinct look included the porkpie hat and rather grubby, ill-fitting clothes. According to legend Keaton was nicknamed Buster by his father’s friend, Harry Houdini, after witnessing the youth dropping down some stairs unhurt.

Stylistically, Chaplin favored close-ups and medium close-ups with artistic lighting; Keaton preferred the long shot with a cluttered screen image with lots of things going on. In the truly inventive opening scene in “Cops,” Keaton’s character seems to be behind prison bars talking to his sweetheart. But as the camera pulls back we see she is on one side of her large gate outside her house, while Keaton remains on the other side. In several scenes during the climactic chase, Keaton’s character utilizes a ladder that’s tipped over an eight-foot fence. In the foreground, 6-8 policemen try to manipulate Keaton off the middle of the ladder like on a large see-saw, while in the background dozens of others approach.

Chaplin would defy the sound era and made two mostly silent films in the 1930s: “City Lights” and “Modern Times”. His only compromise to sound was the contribution of his originally composed film score and added exaggerated sound effects in several scenes. He’d only make a total of five more sound films. Keaton transitioned into sound films quicker but was never the star of his silent period. 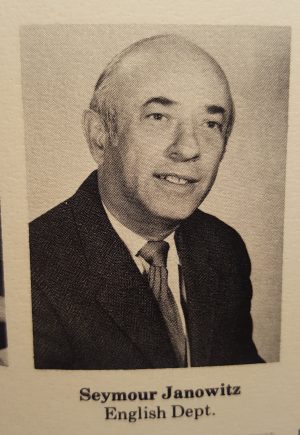 Years later I would discover with great pride that Mr. Janowitz was the author of the Chicago Board of Education’s district-wide curriculum guide for film studies.