The idea of a farewell show for local record label Heirship Records was still in the works as owner Isaac Arms was in the midst of moving out of state with their partner, heading towards unemployment and trying to figure out how to sell their possessions in order to afford rent while looking for work.

“I had a lot of very stressful things on my mind,” Arms said. “I had to go with what my gut told me and not second guess it which is kind of my M.O.”

Arms announced the end of Heirship Records this past September after a seven-year-long run serving the local music scene in Champaign-Urbana. The label — which was completely run by Arms — made its mark helping various local bands and musicians create and share their music throughout the years.

As a way to celebrate the label and also sell some records, Heirship Records will be hosting a farewell show featuring eight bands and musicians. Mother Nature Music, Windmills, Grandkids, Motes and Terminus Victor will be performing in addition to reunion sets by Withershins, Hot Cops! and Evil Tents.

The night before, the band Take Care will also be holding the release show for their self-titled album which will be Heirship Records’ final release.

“I’m glad it’s going out with a bang,” said Elizabeth Majerus, guitarist and vocalist for Motes. “I think it’s great that Isaac has been extremely intentional in the way they are choosing to shut down the label and celebrate the end.” 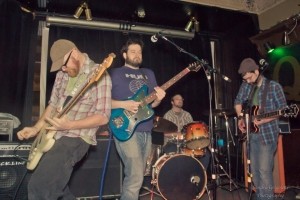 Isaac Arms (second from left) performing with Withershins live at Quenchers in Chicago.

Arms moved to the CU area when he was 18 years old and made his rounds making music and booking shows. They started their first label “Pop Monster Records” in 2006 which didn’t make it more than a year. It was around the end of his first label when their band Withershins formed and started releasing music in 2009.

“DIY wasn’t really a choice,” Arms said. “People tend to think of DIY meaning punk and emo, and there’s an aesthetic, but in 2009, by then, you had to do your own everything.”

Heirship Records was formed in 2011 when Arms saw the abundance of talent in CU and wanted to help shed light on bands in the area and help them release music.

“By 2011, I started to feel like there was just so much talent in Champaign-Urbana,” Arms said. “There was so much going on, so many different bands doing amazing things. From the start, it was supposed to be a label that just represented what was happening in Champaign-Urbana.”

As part of helping artists release their music, it presented Arms with opportunities to collaborate and be involved with the actual music-making process on various levels. Arms’ involvement ranged from just paying the bills to being able to produce albums, design album art and play musical parts in songs.

“These collaborations, working together musically in projects that aren’t necessarily mine — whenever I’ve been allowed, it’s very easy for me to have this beautiful feeling of, ‘Here’s what I can do, here’s what I can contribute, what do you all think? I’m here to help,’” they said.

Arms said one of his favorite memories of running Heirship Records was mastering the album “Prevention vs. Intervention” by Terminus Victor in his car.

“I’ve probably listened to that CD more than any other CD in my entire life,” they said. “I was so excited like, ‘Oh my God, this is like my new favorite record and I am the person who is able to help other people hear my favorite record.’” 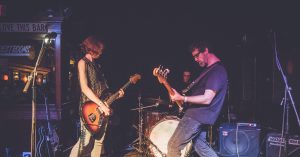 CU band Motes performs. Motes is one of the bands currently signed to Heirship.

Scott Kimble, vocalist and bassist of Terminus Victor, explained what is was like working with Arms.

“We truly appreciate everything that they did for us,” Kimble said. “We never took their interest in us for granted. They were perfect to work with. The label functioned utilizing the honor system. Also, they let everyone’s musical vision remain intact.”

From when Heirship Records was first created, Arms made music the priority rather than making money. They initially intended to set up the record label so someone could take it over when they left, but their plans didn’t pan out that way. In addition to them moving away from the CU area, they said another reason why they ended the label was that of finances.

Arms reflected on his mentality in the early days of Heirship Records and coming out with releases. “I was 19 or 20 when these ideas were brewing,” Arms said. “I think for me it was as simple as, ‘Well, I’m willing to go into credit card debt for these other people’s sakes so they could focus on the music.”

“I came from a world of, ‘It doesn’t really matter if it sounds like trash, if you put your heart in it and it’s good music and you make it with love, it’s beautiful,” they continued. “I think I thought that was our way out of just Champaign-Urbana listenership, if we make this stuff sound world class then maybe everybody in the world can hear it.”

As Arms leaves the record label, they have started settling down from his early days of over-spending.

“It’s not like I had a sh*t ton of money and then decided, ‘I’m gonna use my massive wealth to help these poor, struggling artists,’” they said. “No, I was just young and willing to go into credit card debt because I felt, ‘Why not?’ But now I’m older and I’m trying to be a little less reckless.”

Arms said they value the relationships they were able to form with these artists at Heirship Records and sees them as the positive side of the label ending. “It’s always been about my relationship with these artists. Every project has been a collaboration,” they said. “I feel like it’s almost better that it’s done because I might more clearly look back on what I accomplished with those folks.”

With Arms leaving the CU music scene and Heirship Records coming to a close, they sees it as a way to allow the newer generation of artists to take over the scene.

“I kind of on purpose have been trying to step back my involvement in the scene —  they’re people who of all ages are vital to the scene — but there are younger generations of people who I could be more of a supporting role to their lead because they know what’s actually going on and it’s their voice that is strong and it’s not my business anymore,” he said. 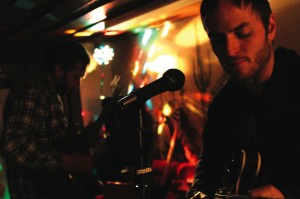 Arms is also a member of two of the reunion bands that will be performing at the farewell show: Withershins and Evil Tents.

“I think it marks the end to quite a big chapter in Isaac’s life, and it’s also a melancholy event for the C-U music scene in general,” said Colin Larson, guitarist, percussionist and vocalist of Withershins. “Isaac really put they’re heart into fostering a wonderful music community here and Heirship Records was the flagship for it.”

Evil Tents’ “Night Air on the Midway” was one of the first releases of Heirship Records in 2011. It has been an extended amount of time since the band has last performed together.

“I think for us, when I heard about Isaac leaving town and having a going away show, I think it just made sense to us to want to play one last show,” said John Isberg, vocalist and guitarist for Evil Tents. “I think bands are special in a way, where no one is really replaceable. Four people walk into a room and make music that only those four can.”

Hot Cops! will also be reuniting for the farewell show. Mike Daab, bassist and vocalist of Hot Cops! said the band was immediately on board with performing when Arms approached them with the idea.

Daab expressed the importance of having record labels like Heirship which supported local music in the CU area.

“It’s really been great to have a family locally that you can lean on for partnering for shows, to have a home for your music that can play off the strengths of other bands locally,” Daab said. 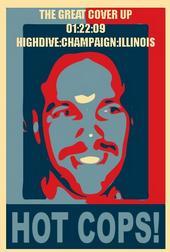 Hot Cops poster from The Great Cover Up 2009.

Nicholas Garcia, vocalist and guitarist for Windmills, was a fan of Withershins and Hot Cops! in 2014, but it wasn’t until later when he realized they both came from Heirship Records.

Windmills joined the label in the beginning of 2015 — a moment that Garcia remembers fondly. Arms invited him and his bandmate Matt Yeates over to Arm’s house to talk about music and what they wanted Windmills to be. Garcia said that joining Heirship Records felt like having another family.

“My favorite detail about that night was the fact that we sealed the deal with a big hug,” Garcia said. “Rock is normally so predominated by an aversion to male intimacy that a big hug like that makes it all the more worthwhile. Belonging and sense of group identity are both things I struggle with, so to be invited into a circle of people who share my love of music is one of the warmest feelings in the world.”

Arms emphasized the impact they hoped they had on the bands they was able to collaborate with.

“Whenever I say, ‘It’s the music not the money’ — the way I succeeded within that paradigm is even though I went into debt, I have no regrets about it because I think if you ask any of the Heirship Records artists about how they felt about the experience I would hope at least they felt like they had somebody who listened to what their creative goals were and did what they could to help them realized those dreams,” they said. “That’s what it was about.”

Vivian McConnell, vocalist and guitarist for Grandkids, said she feels like she owes Heirship Records a lot for helping and being part of her band’s journey.

“I feel like we wouldn’t have been able to release our most recent record without the support of Heirship,” McConnell said. “To run a small label where care is being put into every single musician and artist — that takes so much work and so to have somebody doing that for you, it’s just so nice and Isaac just makes you feel really valid.” 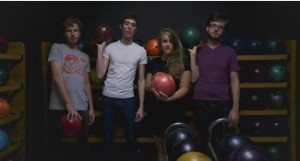 Grandkids. Used with permission by Grandkids.

Through Heirship Records, Arms has also allowed bands to focus more on creating music by taking care of the logistical and pragmatic aspects and being able to provide resources for the artists and help them through the process so they don’t have to figure it out on their own.

Majerus describes the label as more than a business but rather, a labor of love.

“I think it’s valuable to commit to doing art, for the love of doing art rather than to make money or to sell something,” Majerus said. “To me, making music in order that people hear and connect to your music is very valuable in itself so I hope there will always be people like Isaac who are willing to devote their time and energy to helping people make art and get art out to a public.”

Arms reflected on their feelings in the days leading up to the final farewell show.

“It’s going to be sad when it’s over,” Arms said. “It’s been nice to look forward to with joy of being around people that I love and respect and getting to make music with them and see them do their thing. I imagine I’ll probably cry like a baby but I’m probably going to enjoy myself and rock out as well.”

The Heirship Farewell Fest is on Dec. 15 at the Canopy Club. Doors open at 6 p.m. Advanced tickets are $8 and tickets on the day of are $10.